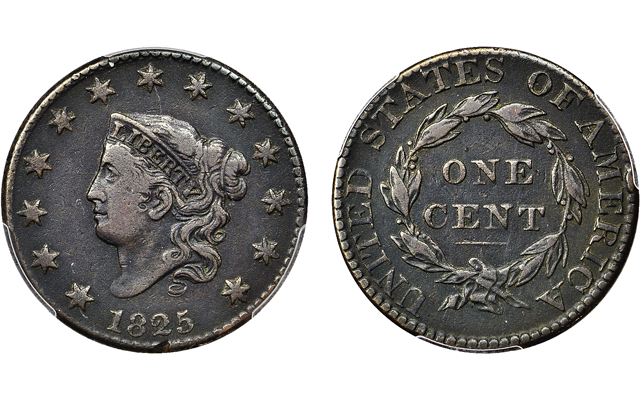 The Newcomb 5 variety of 1825 Coronet cent was first cataloged in 1880, but not confirmed to actually exist until an exampled was identified in an eBay auction in 2011. The example illustrated is graded PCGS Very Fine Details, Environmental Damage. 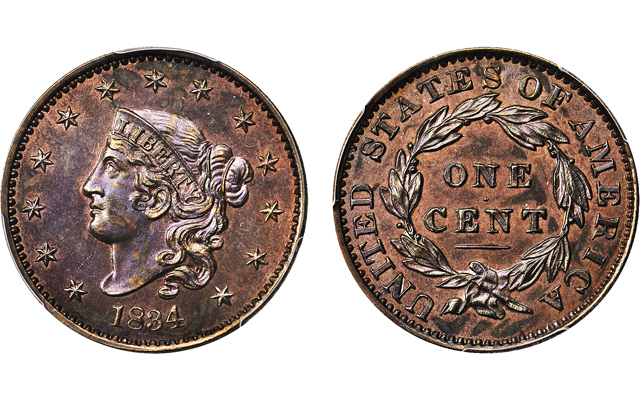 The PCGS Proof 65 brown N-3 1834 Coronet cent in the collection was struck from the same pair of dies used to strike the 1834 cent in the King of Siam Proof set. 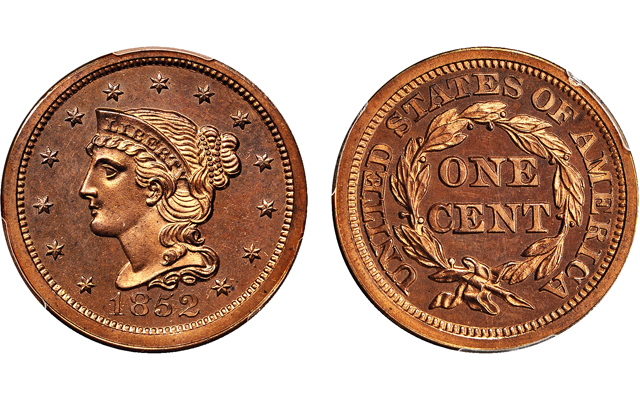 The Twin Leaf Collection of large cents to be offered by Stack’s Bowers Galleries in July includes a nearly complete set by Newcomb number as attributed by Howard Newcomb in United States Copper Cents 1816-1857.

More than 50 Proof Middle Date and Late Date large cents, from 1817 through 1857, are offered in the auction, along with more than 150 coins with provenance that they were once in the collection of numismatist Roy E. “Ted” Naftzger Jr.

The Twin Leaf Collection is being offered by Stack’s Bowers Galleries in its sale to be held in conjunction July 16 to 19 with the Whitman Baltimore Expo.

According to Stack’s Bowers, the Twin Leaf Collection is consigned by the same collector who amassed The 1853 Collection of gold and silver coins, which reflected the collector’s affinity for U.S. coins from 1853.

The owner’s building of The 1853 Collection — which contained no large cents and was sold at auction by Stack’s Bowers Galleries Oct. 30, 2014 — eventually led the collector to build the Twin Leaf Collection.

Among the highlights of the Twin Leaf Collection:

??A PCGS Proof 65 brown 1834 Coronet cent, N-3, struck from the same pair of dies used to strike cents that were included in a Proof set diplomatically presented to the King of Siam.

??A PCGS Proof 65 red 1852 Coronet cent, once part of the famed F.C.C. Boyd Collection, and the finest of three known examples positively identified as Proof strikes.

The collector who assembled the Twin Leaf Collection began his odyssey circa 1990 seeking large cents with the assistance of large cent specialists Bob Grellman and Chris McCawley.

The collector initially focused on 1853 cents by die variety and die state, eventually expanding his scope to incorporate all varieties from 1793 through 1857.

The collector’s Early Date cents were acquired as a group in a 2005 private transaction by Grellman and McCawley, with many of those coins subsequently finding their way into the Dan Holmes Collection of large cents that went to auction Sept. 6, 2009.

Grellman said that in 2002 he acquired 18 rare Proof cents for the collector, all previously in the Naftzger Collection. The group included the 1825 N-5 cent and an 1823 N-2 cent, both unique or semi-unique as Proof strikes.

The collector said assembling the large cent collection has been both a joy and a challenge. The collection held 302 of the just over 350 varieties known.

The collector said he decided not to hold onto the collection to attempt completion by die variety, since that goal is unattainable. The collector said some of the varieties missing from the Twin Leaf Collection are unique or known by just two or three pieces.

The Newcomb 5 variety of 1825 Coronet cent was first cataloged in the early 1880s by numismatic researcher Frank Andrews in the second edition of his An Arrangement of United States Copper Cents, for the Assistance of Collectors.

Andrews attributed the variety as a pairing of his A4 Obverse and A10 Reverse.

When Newcomb prepared and published his landmark reference in 1944, he used Andrews’ work as a basis for confirming varieties.

Newcomb had never seen an example of the Andrews variety now known as the Newcomb 5 and was unable to confirm its existence. However, in December 2011, collector Tom Deck identified an example in an eBay auction, and the Newcomb 5 variety became fully recognized in the large cent community.

Once in the collection of noted 19th century numismatist Edward Cogan, this example of the Newcomb 3 variety of 1825 Coronet cent exhibits a Large 8 in the date, small stars, and medium letters.

At the end of calendar year 1834, President Andrew Jackson asked the U.S. Mint to produce sets of Proof coins for diplomatic presentation.

In his 1989 work, Walter Breen’s Encyclopedia of United States and Colonial Proof Coins 1722-1989, the author identifies five N-3 1834 cents known to him, and speculated that fewer than 10 examples of the variety exist in total.

Large cent specialist Denis Loring confirms at least six examples of the Newcomb 3 1834 Coronet cent, of which four examples are in private hands as individual coins.

Another example is included in the privately held King of Siam set and one is held in the National Numismatic Collection at the Smithsonian Institution.

The coin is considered to be the finest known among three N-24 coins certified as true Proofs.

According to the auction cataloger’s lot description, “Clearly, this unusually bold red color is of long standing and stable.

“It would be interesting indeed to ascertain the owners prior to F.C.C. Boyd, as this coin has obviously been in the care of attentive custodians since it was struck.

“All 1852 die varieties previously described as Proof or possibly so in the literature are believed to simply be superb specimens of early die state coins.”

For more details about the Twin Leaf sale, visit the special page at the Stack's Bowers Galleries website.