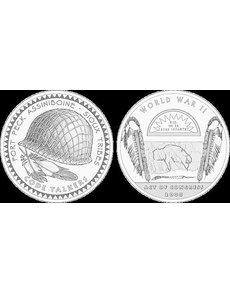 The CCAC recommended the above designs for a congressional gold medal honoring members of the Fort Peck Assiniboine and Sioux Tribes that served as code talkers during World War II. 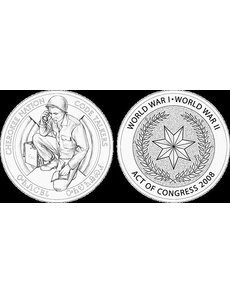 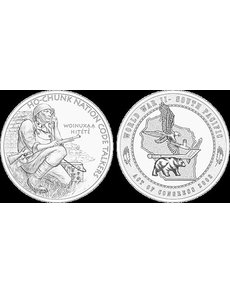 For the Ho-Chunk Nation of Wisconsin medal, the CCAC recommended an obverse depicting a code talker at work while propped against the remains of a wall; the recommended reverse depicts the tribal nation seal. 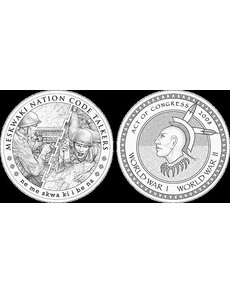 Designs recommended by the CCAC for the medal honoring Meskwaki Nation of Iowa code talkers depict split images of code talkers sending and receiving messages on the obverse. The suggested reverse depicts the tribal nation’s logo. 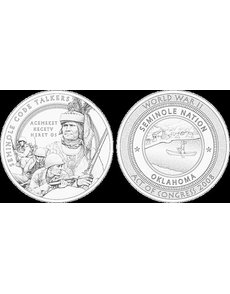 Billie Bowlegs, the last Seminole tribal leader in Florida before the Seminoles were ordered West, is recommended in a design for the obverse of the medal honoring the Seminole Nation of Oklahoma. The reverse recommended depicts the tribal seal. 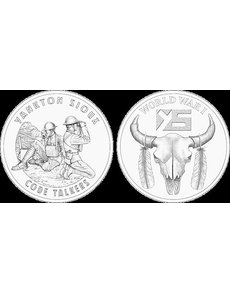 The obverse design recommended by the CCAC for the code talkers medal for the Yankton Sioux Tribe of South Dakota depicts one soldier sending messages with the other spotting enemy positions. The reverse recommended depicts a buffalo skull with tribal colors. 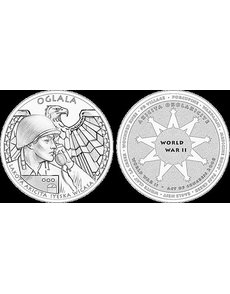 An infantryman against the backdrop of an eagle is depicted on the CCAC-endorsed obverse for the Oglala Sioux Tribe of South Dakota Code Talkers medal. The recommended reverse features a design based on the Oglala Sioux tribal flag.
Previous
Next

With lavish praise for the U.S. Mint’s latest medal series, the Citizens Coinage Advisory Committee followed the wishes of tribal governments in recommending designs for seven new Code Talker medals.
Although it had tribal support for every recommendation, the committee also declared that Mint artists had breathed new life into a congressionally-mandated medal series for every Native American tribe that ever sent Native-speaking code talkers into World War I or World War II.

After the medals discussion, the committee addressed design concepts for the 2015 America the Beautiful quarter dollars.

Currently, 32 tribes are enrolled in the Code Talkers program, up from a projected 25 when the medals were approved in 2008.

When the Commission of Fine Arts reviewed the same medals June 20, that panel made its recommendations without a public discussion of the designs.

But at the CCAC’s June 25 meeting, it proved impossible for the nine members to curb their enthusiasm over the projected designs. The members hailed a new artistic vigor for a series that had seemed to be dominated by views of servicemen talking on vintage radios.

“I feel like we have had new code talker medals this time,” said Pennsylvania artist Jeanne Stevens-Sollman.

Medals specialist Donald Scarinci, often the most critical member of the panel, called the designs “an amazing job.”

Erik Jansen, a collector from the Pacific Northwest, described the seven medals as offering “a whole different class of medals” from the previous ones in the series. It is a difference like “night and day,” he said
Michael Moran, a Kentucky collector, agreed with his colleagues. “You can get numb with these guys holding those old radio telephones in their hands,” he said.

Michael Olson, an Iowa collector, also praised the new designs as not being “recycled” from the earlier medals. He said the Mint had produced “a very, very good body of work.”

Another Iowa collector, Michael Bugeja, said the use of movement in some of the designs is “so exciting” and called the obverse of a recommended medal for the Seminole Nation of Oklahoma “just gorgeous.”
There were appeals to the Mint not to discard some of the designs but to bring them back to the committee for other tribes yet to be honored in the series.

In all it was “pretty much a victory with tribal preferences,” said CCAC Chair Gary Marks of Idaho. The committee had to name Marks their acting chairman for the meeting because a U.S. Mint lawyer said the paperwork for his reappointment had not cleared the Mint’s administrative offices by the time of the meeting.

The committee’s recommendations go to Treasury Secretary Jack Lew who has the final say on all coins and medals issued by his department.

The CCAC made its recommendations under a voting scheme that allows each member to cast up to 3 points for any of the proposed designs.

With nine members present, that meant a maximum of 27 points.

Here are the results:

??Fort Peck Assiniboine and Sioux Tribes of Montana: A design featuring an infantryman’s helmet and two feathers secured 25 points to be recommended for the obverse.

The recommended reverse design shows an outline of the Fort Peck reservation, a buffalo outlined by rivers and creeks, two eagle staffs and the 41st Infantry Division patch.

??Cherokee Nation of Oklahoma did not indicate a design preference for the obverse of its medal. Both CCAC and CFA agreed that the selection should show a crouched infantryman with a radio device. The CCAC’s selection got 18 points in the balloting.

For the reverse, the CCAC voted for a design showing the Cherokee Nation seal, which was favored by the tribal government. It got 24 points.

The CFA had favored another version of the seal, which got only 3 points in the CCAC poll.

??The Ho-Chunk Nation of Wisconsin: After a tribal representative said the tribe would back an obverse design showing an infantryman with a rifle sheltered by the remains of a brick wall, it secured 21 points.

That was well ahead of another design showing an unhelmeted infantryman on a radio, which drew 14 points and had been endorsed in a letter from the tribe.

The CFA selected the same obverse design as the CCAC favored.

For the reverse the CFA and CCAC strongly backed the tribe’s selected design depicting a variant of the tribal seal including an eagle, bear, peace pipe and war club. It secured 26 points.

??For the Meskwaki Nation of Iowa, the tribe endorsed an obverse design showing two infantrymen talking on radio devices in combat. It won 20 points for the CCAC endorsement.

The CFA had endorsed a design showing a single infantryman. For the reverse, the CCAC also accepted the tribe’s recommendation showing a tribal logo against a darker background than one the CFA preferred.

??The Seminole Nation of Oklahoma secured approval of an obverse design showing a image of Billie Bowlegs, the tribe’s last leader in Florida before the tribe was ordered to move West. That design secured 27 points.

The CFA had favored a design showing a helmeted figure.

For the reverse, the CCAC endorsed a tribal seal of an Indian in a canoe approaching a trading village. It secured 23 points after a tribal representative said the tribe would endorse this design if the word “of” was placed before OKLAHOMA.

The CFA had endorsed a design showing two lacrosse sticks.

??The Yankton Sioux Tribe of South Dakota won endorsement of its preferred code talker obverse design showing two helmeted infantrymen working back to back in a combat position. It secured 24 points in CCAC balloting.

The CFA had endorsed a design showing an infantryman racing through bullets. For the reverse, the CCAC voted for a tribal-preferred design showing a buffalo skull with tribal colors. It got 20 points.

The CFA had endorsed another skull design which did not include the tribal logo.

??The Oglala Sioux Tribe of South Dakota’s preferred obverse of an infantryman against an eagle won the CCAC’s strong endorsement, securing 23 points.

The CFA had backed a design showing a single infantrymen talking into a radio.

For the reverse, the CFA and CCAC both supported the same version of the tribe’s seal, with nine tepees representing the nine districts of Oglala. The design secured 24 points and came with a recommendation that a second reference to WWII participation by the tribe be eliminated on the reverse.

During the CCAC’s discussion of design concepts for the 2015 America the Beautiful quarter dollars, CCAC Chariman Gary Marks stressed that “the best images are emblematic ones.”

Mint artists should use the symbolism of a plow to illustrate the Homestead National Monument in Nebraska, Marks suggested.

Designs for the series have been “difficult to create,” Marks said, citing the small palette of the quarter dollar.

For Delaware’s Bombay Hook National Wildlife Refuge, he suggested artists concentrate on the wildlife.
“I don’t want the artists doing anything other than wildlife,” said sculptor Heidi Wastweet of Seattle.

“You need to send the artists out there,” said Olson.

“We’ll be looking for symbolism not photographs,” said Jansen.

The three other historic sites to be honored on America the Beautiful quarter dollars in 2015 are Kisatchie National Forest in Louisiana, Blue Ridge Parkway in North Carolina and Saratoga National Historical Park in New York.