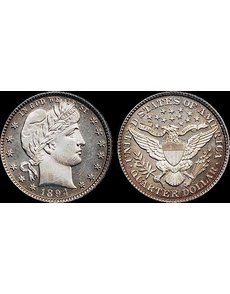 This beautiful Proof 63 1894 Barber quarter dollar is a lovely coin that just about anyone would want to own. But, why does it grade Proof 63 instead of Proof 65 or higher?

In April, the Professional Numismatists Guild adopted a resolution regarding “coin doctoring.”

Among the techniques banned: “Intentional exposure of a coin to any chemicals, substances, or processes which impart toning, such that the coin appears to be in a better state of preservation or more valuable than it otherwise would be.” However, “Naturally occurring toning imparted during long-term storage using established/traditional methods, such as coin albums, rolls, flips, or envelopes, does not constitute coin doctoring,” the policy reads.

In a recent column, I said that “long-term” was not defined. We agree that toning added over the period of a century is long term, but what about toning added within a few days or a week by exposure to sunlight or fumes?

In his masterwork, Early American Cents, with its update, Penny Whimsy, the standard reference on cents dated from 1793 to 1814, William H. Sheldon gave careful instructions for conserving a coin that had been dipped or cleaned so as to give in an unnaturally bright surface. One technique Sheldon recommended was rubbing the coin with sulfur powder.

Large cent collectors have used other techniques over the years, including wiping the surface of a copper coin with a rag containing a small amount of mineral oil to impart an attractive gloss to the surface. Another standard method used by experts is to gently rub a circulation-strike copper coin in grade less than Mint State with a soft camel’s hair brush.

However, this in many instances defies logic. Take 19th century Proof silver coins — say Seated Liberty and Barber issues. Thousands of such coins have been certified in grades from Proof 60 to 64, and nearly all have hairlines in the fields. When the coins left the Mint the hairlines were not present. How did those hairlines get there? The answer: by cleaning the coins with a polish or an abrasive. A correct description of nearly all Proof 63 coins, for example, would be: “Proof, once cleaned and now with hairlines.” Proof 63 as a term implies that.

In other collecting fields, conservation is viewed as desirable. The Star Spangled Banner and the Declaration of Independence both have been conserved without lessening their desirability.

It seems to me that there is room for a book or essay on the proper conservation of coins, tokens, medals and paper money.