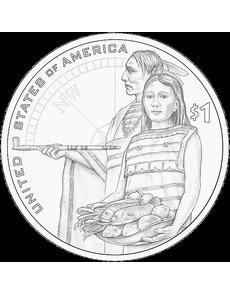 Recommended by both the Citizens Coinage Advisory Committee and United States Mint, the above design was approved by Acting Deputy Treasury Secretary Mary J. Miller for the reverse of the 2014 Native American dollar. 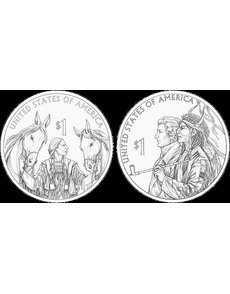 While the two designs illustrated were both preferred by the National Congress of the American Indian, modifications were recommended. The organization recommended changes to the forelock between the ears of each horse on the design symbolizing the Nez Perce’s offer of horses to the expedition. For the second design, it was recommended the pipe held by Mandan Chief Sheheke be removed, based on its specific ceremonial and religious uses. 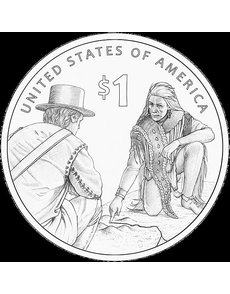 The Commission of Fine Arts endorsed the depicted design, which shows Shoshone Chief Cameahwait, Sacagawea’s brother, recommending to Capt. Meriwether Lewis an alternate land route for the expedition in place of an impassable water route through mountains. 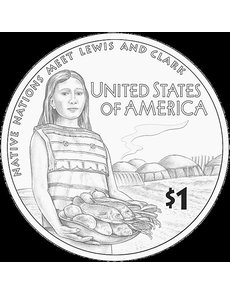 The Senate Committee on Indian Affairs supported approval of a proposed design depicting a Mandan woman offering roots, fish, corn and gourds to supply the expedition. The design was among seven considered for use on the 2014 Native American dollar. 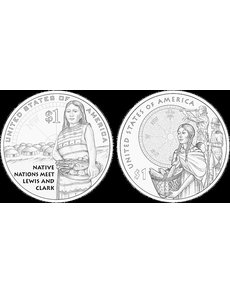 Two designs that received no support from any of the entities consulted were one, above, left, which is a variation of the Senate Committee on Indian Affairs-supported design. The other depicts Sacagawea with a basket of corn, a compass and Capt. William Clark along with Lewis.

A proposed design recommended by both the Citizens Coinage Advisory Committee and United States Mint for the reverse of the 2014 Native American dollar was approved Sept. 23 by Acting Deputy Treasury Secretary Mary J. Miller.

The design depicts a Native American man offering a pipe, while his wife offers provisions of fish, corn, roots and gourds. In the background is a stylized image of the face of Capt. William Clark’s compass highlighting the northwest quadrant the Lewis and Clark Expedition explored.

The reverse design best represents, according to U.S. Mint officials, the approved theme: “Native Hospitality Ensured the Success of the Lewis and Clark Expedition.”

In making their final recommendation, U.S. Mint officials noted the design “best supports the theme and is symbolic of the many Native American families who offered aid, support and friendship to the Lewis and Clark Expedition, essential elements to the success of the mission.”

The approved reverse design will be paired with sculptor Glenna Goodacre’s common obverse depicting Sacagawea and her son, Jean-Baptiste that was used on the Sacagawea dollar from 2000 to 2008. The Goodacre design was adopted for continued use on the obverse for the Native American dollar series, introduced in 2009.

The approved reverse design was selected from among seven designs considered to be historically accurate. An eighth design was removed from consideration after being deemed historically inaccurate by U.S. Mint officials and consulted entities.

Specific reasons for the removal of the design from consideration were not disclosed by U.S. Mint officials.

Themes for the Native American $1 Coin Program are developed by the U.S. Mint in consultation with the National Museum of the American Indian under provisions of the program’s Reverse Candidate Theme and Design Evaluation Process.

Themes are selected after consultation with the National Congress of the American Indian, U.S. Senate Committee on Indian Affairs, Congressional Native American Caucus of the U.S. House of Representatives, and the CCAC.

Under provisions of the Native American $1 Coin Act, Public Law 110-82, reverse designs are selected by the Treasury secretary or his designated representative after consultation with the Commission of Fine Arts and the other consulting entities. All but the CNAC submitted its reverse design preferences to the U.S. Mint.

The CFA made its pick following a July 18 meeting. The CCAC made its recommendation July 23 during the first day of a two-day session.

The U.S. Mint offers for sale 25-coin rolls of Native American dollars struck in circulation quality. The Mint also sells the coins in 100-coin bags, and 250-coin and 500-coin boxes of rolled coins.

Native American dollars are also struck in Proof and Uncirculated Mint set versions for inclusion in other numismatic product options.