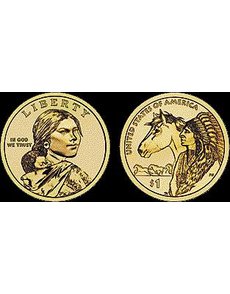 The existing legislative mandate that 20 percent of all dollar coins struck be Native American dollars would be eliminated if President Obama’s proposed budget for Fiscal Year 2013 becomes law.

Obama’s budget proposal is the fourth attempt in five years seeking the transfer of Congress’ constitutional authority over setting specifications for circulating coinage to the Treasury secretary.

According to the proposed FY 2013 budget, providing flexibility of coinage compositions would provide the Mint with the ability to reduce losses on some denominations and production costs associated with volatile metal prices.

“Greater flexibility in the composition of coinage materials could enable the Mint to utilize less expensive metals in the minting process and substantially reduce its production costs,” according to the proposed budget. “Using alternative coinage materials could save the Mint millions annually after a potential initial period of development and capital adjustments. Savings estimates will be available after the Mint concludes ongoing research on the most cost-effective materials.”

The Mint is currently testing alternative coinage compositions for all denominations of U.S. coinage. The 2012 report must be submitted to Congress by Dec. 14, 2012, under provisions of the Coin Modernization, Oversight, and Continuity Act of 2010.

The 2012 report is to be the first of required reports to be submitted by the Treasury secretary to Congress every two years on production costs and possible new metallic materials or technologies for the production of circulating coins.

The enabling act, based on legislation introduced Sept. 22, 2010, by Rep. Melvin L. Watt, D-N.C., evolved from legislation drafted following a two-hour hearing July 20, 2010, before the House Subcommittee on Domestic Monetary Policy and Technology, of which Watt is chairman.

During the hearing, then U.S. Mint Director Edmund C. Moy presented an idea the bureau has promoted for at least three years — granting the Treasury secretary discretion to adjust the composition and size of circulating coins.

Authority to determine the composition, size and value of coins is expressly delegated to Congress in the U.S. Constitution.

In his opening statement at the July 20, 2010, hearing, Watt rejected Moy’s idea, instead recommending the Mint execute research into alternative metals for circulating coinage, given that the costs to produce and distribute both the cent and 5-cent coin were nearly double their face value at the time.

Watt, who suggested the Mint report its findings to Congress after completing its research, formalized the approach in his legislative proposal.

The proposed budget notes that profits from the dime, quarter dollar and dollar coins are used to offset the production costs for the cent and 5-cent coin, which most recently were calculated to cost 2.4 cents and nearly 11.2 cents to produce.

Provisions in the proposed budget would also eliminate the legislative mandate that 20 percent of all dollar coins produced by the U.S. Mint be Native American dollars.

“Numismatic quality dollar coins would remain available for purchase, but eliminating the twenty percent requirement would increase the Mint’s flexibility to match the supply to consumer demand,” according to the proposed budget.

The U.S. Mint is still expecting to strike circulation-quality Presidential and Native American dollars at the Denver and Philadelphia Mints and offer them for sale at numismatic premiums above face value. Full plans for ordering options have still not been disclosed by U.S. Mint officials.

However, the proposed FY 2013 budget notes that the suspension of Presidential dollar production will also reduce the amount of revenue available to the U.S. Mint to offset production costs for the cent and 5-cent coin, according to the proposed budget.

The revenue citation refers to seigniorage — the net profit generated from the difference between the face value and the overall production and distribution costs of each coin.

Seigniorage for the dollar coin was most recently reported at 82 cents per coin, according to the U.S. Mint’s annual report for FY 2011. ¦