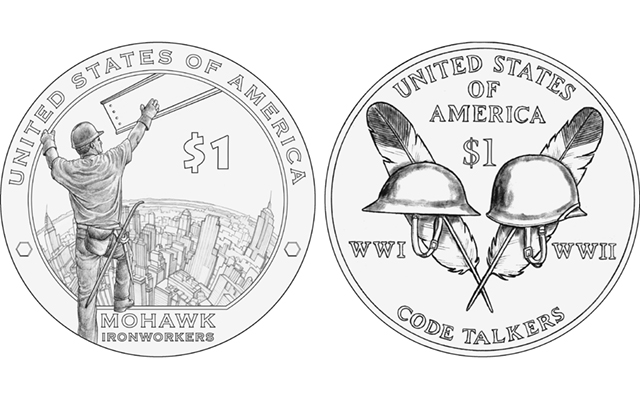 Final designs adopted for the reverses for the 2015 and 2016 Native American dollars were unveiled Aug. 29 by the U.S. Mint.

According to the Mint, “The reverse design represents a Mohawk ironworker reaching for an I-beam that is swinging into position, including rivets on the left and right side of the border and a high elevation view of the city skyline in the background.”

The 2016 Native American dollar reverse was designed by Thomas D. Rogers Sr., a former U.S. Mint sculptor-engraver who retired from the Mint’s engraving staff in 2001 after 10 years of service.

Rogers was one of several supplemental artists who worked with the Mint from June 2013 to December 2013, according to Lateefah Simms, public affairs specialist for the U.S. Mint’s Office of Corporate Communications.

Rogers is perhaps best known for designing the reverse of the Sacagawea dollar used from 2000 to 2008.

Rogers’ 2016 Native American dollar reverse design, according to the Mint, “features two helmets, the dates 1917 and 1945, and two feathers that form a ‘V,’ symbolizing victory, unity, and the important role that the Code Talkers played” in World Wars I and II.

At the time of the design’s unveiling, the member of the Mint’s engraving staff to sculpture the design had not yet been assigned.

The adopted 2015 and 2016 Native American dollar coin reverse designs were both previously recommended by the Commission of Fine Arts and the Citizens Coinage Advisory Committee.