Treasures abound in story of an innovative female counterfeiter 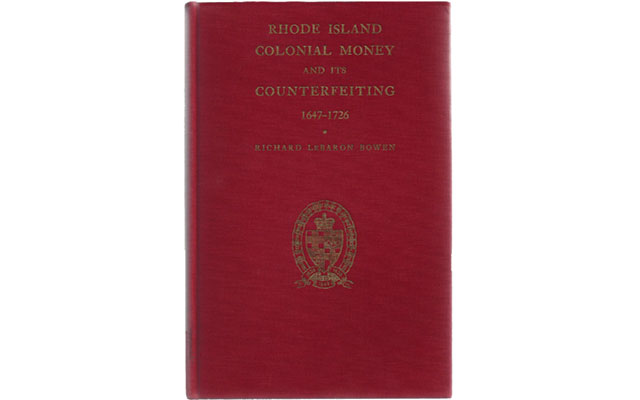 Take it from the Numismatic Bookie: if you collect numismatic literature, you’ll never run short of fascinating facts about your hobby.

After 35 years of serious searching, I still regularly encounter new (at least to me) books packed with remarkably interesting information.

Did you know that one of Colonial America’s most notorious counterfeiters was a woman? I didn’t until August 2014, when I snared an obscure volume at a benefit auction for the Numismatic Bibliomania Society.

Each year at the NBS annual meeting, generous club members like Dan Hamelberg and David Sundman donate books for a fundraising auction to help cover NBS operating expenses. Having a particular weakness for information about numismatic rogues and rascals, I knocked down Richard LeBaron Bowen’s 1942 book, Rhode Island Colonial Money and its Counterfeiting.

Bowen’s tales all fascinate, but none more so than that of Mary Peck Butterworth, daughter of a prominent family and wife of a successful carpenter, who thus had no need to “carry boodle” in order to survive.

Mary, however, was a shrewd and innovative businesswoman, who enjoyed beating the old boys at their own games.

It all began in 1716. Mary watched her competitors make two mistakes time and again: they printed their bills from copper plates, which were difficult to engrave well enough to make convincing counterfeits; and, when the constable searched their premises, he inevitably found the copper plate, which became evidence.

So she applied her considerable Yankee ingenuity to solve both problems through kitchen chemistry.

Mary took a new genuine Rhode Island bill, laid it flat on her table, covered it with a piece of starched muslin, and ironed both, which transferred some printing from the new bill to the muslin. She then laid a blank piece of paper on the table, covered it with the imprinted piece of muslin, and ironed both vigorously. Ink transferred from the muslin to the blank paper, rendering a close copy of the original bill. A few blanks and weak spots were filled with ink with a quill pen.

Finally, when her muslin “plate” gave out, Mary destroyed the incriminating evidence by dropping it into her kitchen fire.

From 1716 to 1723, Mary made an ever-increasing number of fake Rhode Island bills.

Eventually she employed several individuals to “pass the queer bills.”

But in 1723, all that activity attracted police attention, and Mary, her husband, and several of her employees were arrested on suspicion of counterfeiting.

None did time, for thanks to Mary’s innovative rascality, the evidence required to convict them had literally gone up in smoke.