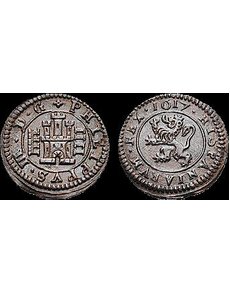 This 1617 4-maravedi coin, struck under Philip III of Spain, is of a type identical to many of the pieces uncovered near Spanish settlements in Florida.

One of the great perks of the job I have is discovering new little chapters of numismatic history here and there. I’ve been lucky enough to find rarities hidden in museum collections, as consult on a shipwreck and make discoveries in both collections and in books.

Recently I had the chance to study a hoard of coins, mostly copper pieces, that were discovered by a metal detectorist near a major Spanish settlement on the east coast of Florida.

This detectorist, like most I’ve met, is an avid local historian, a capable researcher who does his homework with books and maps before he ever turns a spade of soil. This fellow had found a pretty good spot to find items from the Spanish era in soil disturbed by modern development. While hardly virgin soil, it still kept many of its secrets from about 400 years ago.

The Spanish were the first Europeans to settle the modern United States, establishing the first permanent settlement at St. Augustine in 1565. Two decades later, Sir Francis Drake burned the town, which was quickly reestablished, even though English and French forces were a continual threat. The Spanish stronghold flourished in the 17th century, and the fort they built in the last quarter of that century still stands.

The lion’s share of the coins found in this hoard were from the 17th century, with just a few 18th century and later pieces. Nearly all were copper, small bronze pieces struck on the Spanish mainland denominated in maravedis. The largest of these, worth 8 maravedis, was essentially equal to a quarter real in silver, making it a small but useful unit. The most frequently found denomination was a 2-maravedi piece, a small bronze coin that composed just a 1/136 part of an 8-real coin.

While most of the small bronze coins circulating in Spain in the 17th century were countermarked in a series of mid-century coinage revaluations, relatively few of the countermarked pieces were found in the hoard, suggesting that the coins had been imported to America prior to the 1641 and 1652 countermarking acts.

Spanish copper coins from the 17th century are found up and down the Eastern Seaboard, one here, one there, suggestive of the need for small change in early America and the frequent commercial intercourse between the British colonies and the Spanish dominions of the Caribbean and South America. They’ve even been found at Jamestown.

Spanish settlements on the east coast of America tended to be minor garrisons and missions, too small to support a significant commercial life. The significant number of pieces from this hoard, once studied, should offer special insight into what circulated in Spanish North America before the Pilgrims ever left home.