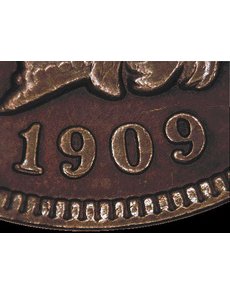 The first area to check for evidence of a counterfeit is the date. Under magnification, this piece exhibits doubling at the base of the 1 and first 9. No genuine 1909-S Indian Head cent exhibits this type of doubling in the date digits. 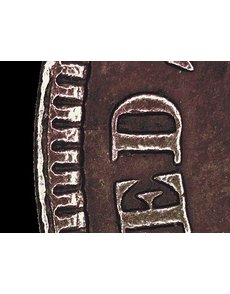 The area between the top of the D in UNITED to the rim on this counterfeit 1909-S Indian Head cent exhibits a small incuse line starting at the center of the D. The bottom edge of the line shows a raised ridge.

The 1909-S Indian Head cent is one of the key dates in the series. With a mintage of only 309,000 pieces, it is scarce enough to command prices in Coin Values of $700 in Very Fine 20, $900 in About Uncirculated 50 and $1,400 in Mint State 63. With these prices, it is no wonder that the 1909-S Indian Head cent has attracted the attention of counterfeiters and alteration experts.

At one point, the majority of fake 1909-S Indian Head cents were simply added S alterations. Recently we have been seeing more die-struck counterfeits of this issue. The coin shown here is a good example of a fake struck from transfer dies.

Transfer dies employ fairly sophisticated manufacturing techniques, where all of the details of a genuine coin are “transferred” to a set of counterfeit dies. Coins produced using fake transfer dies are usually quite deceptive, capable of deceiving even experienced collectors.

Since these fake dies were produced from a genuine 1909-S Indian Head cent, the design details and the lettering will all be correct on pieces they strike. Many recent fakes coming from Asia can be spotted by their crude, hand-cut date digits — this counterfeit does not have this easy diagnostic. The S Mint mark is the same size, style and location as on a genuine cent. We need to focus on the finer details to detect this type of fake.

The first diagnostic area to check is the date. Under magnification, minor doubling can be seen at the bases of the first two digits in the date. No genuine 1909-S Indian Head cents exhibit this type of doubling on the date digits, making this immediately suspicious.

The second pickup point for this counterfeit is the area between the top of the D in UNITED and the rim. A small incuse line connects the center of the top of the D to the rim. The bottom edge of this incuse line is a tiny raised ridge that helps to define it. This line was most likely a small scratch on the genuine coin that was used to make the fake transfer dies, and it appears on every example of this counterfeit. It is a tiny defect, so you will need to use a magnifier and proper lighting to pick it up.

Most examples of this fake appear to be AU with no luster, although they do possess a realistic chocolate brown color. Collectors mulling the purchase of a 1909-S Indian Head cent should look closely at these two areas. This counterfeit is one of at least a dozen different fake 1909-S Indian Head cents that ANACS has seen over the years, so if the coin you are inspecting does not show these diagnostics, it is not proof that the coin is genuine.