Traditional design gets nod for 2012 dollar 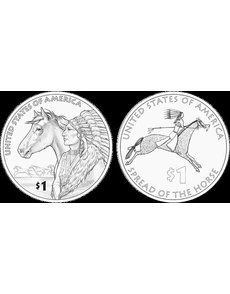 Members of the Commission of Fine Arts recommended the design at far left, showing a Plains Indian and a horse, be adopted for the 2012 Native American dollar coin. Several members praised designs bearing Plains Indian “ledger art,” such as the design at near left, but the panel still opted for a more traditional design.

Commission of Fine Arts members praised the U.S. Mint for attempting to reproduce Native America-styled art images on the reverse of the 2012 Native American dollar coin, but recommended that the coin carry a more traditional design.

In a June 16 meeting that showed the influence of Edwin Schlossberg, the panel’s newest member, the commission urged that the coin show a design of an Indian with an eagle-feather headdress, alongside a horse.

The vote came despite the urging of Pamela Nelson, the commission vice chair. Nelson, a Dallas artist who was presiding at the meeting, wanted the panel to delay voting on the Mint’s 13 proposed designs until it could produce more designs featuring “ledger art” images of Native Americans.

Six of the designs were patterned after the ledger art genre that was created by Plains Indians between 1860 and 1900. That was when the federal government was pushing tribes onto ever smaller tracts of land. As a result, paintings of buffalo hunts and other scenes that had been placed traditionally on animal hides were placed on the pages of smaller ledger books and other materials.

Several other members also praised the Mint for using the ledger art designs. One of those who liked the concept, however, found “none in that style make for good coins.”

Don Everhart, the Mint’s senior engraver, told the commission he liked those images because he believed the coins should be “seen through Native American eyes.”

Schlossberg, who teaches design at Columbia University, had urged that the incused $1 on the coin be moved closer to the edge of the coin. Another member of the panel suggested that the three galloping horses in the background be removed for simplicity.

The commission’s recommendations, along with one from the Citizens Coinage Advisory Committee, a second review panel, will go to Treasury Secretary Timothy Geithner. He will have the final decision on what design goes on the coins. The CCAC will consider the designs at its June 27 meeting during the American Numismatic Association Summer Seminar in Colorado Springs, Colo.

The 2012 reverse will be the fourth in a series that celebrates Native American contributions by Indians to the United States. The 2012 coin is to mark trade routes of the 17th century and the spread of the horse across the country. ¦