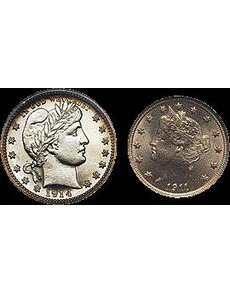 Some collectors consider among the nation’s ugliest coins those of Mint Chief Engraver Charles E. Barber, whose female personifications of Liberty look more masculine than feminine. Other collectors like the designs.

My December column about ugly coins touched a nerve with some passionate collectors who emailed me either in agreement or protest.

Recapping, I said the Presidential dollars (all of them), “spaghetti hair” Washington quarter dollars, Lincoln, Union Shield cents, and Barber dimes, quarter dollars and half dollars are coyote-ugly.

Collector Michael N. Warner calls the Barber coins “the silver stuff from 1892-1915.” Liberty on the obverse looks like a guy, he emailed. “The quarter and the half share the ‘Super Chicken’ reverse that I hate. I have also called this the ‘eagle in a stick up’ reverse.”

Warner wrote, “I think I have just discovered why Theodore Roosevelt was so keen on getting U.S. coinage changed to something different, and why he went to artists outside of the mint to do it.”

Todd L. wrote: “I’m in full agreement about the presidential series, and have said the same as you did since first seeing them. I disagree about the Barber series. I thought they were boring until I saw high-grade examples of them.”

Todd has a point. I first encountered Barber coins, especially half dollars, in change as a kid. That did lead to a prejudice. The coins were 45 and more years old then, and 50 cents was a lot of money to a kid whose earnings came from a paper route. You had to keep one when you got it, but you hated doing that, too.

Eventually, something better would come along, probably a car model kit at that point in my life, and I’d part with the coin.

Todd disagreed about the Lincoln, Union Shield cent, too. “The Shield cent also has roots in our Civil War coinage, and I like its appropriateness to Lincoln.”

Mike Locke of California Gold also dislikes the Barber coins. “It might be noted that Barber made every portrait look like a man. The one prominent male portrait that he [Barber] did: the King of Hawaii, came out very good and I am sure that the king was pleased.”

Locke’s ugliest coins are: Liberty Head 5-cent coin, Barber’s silver coins and the Morgan dollar. He wrote, “All of which are supposed to depict a female liberty but the uninitiated will ask, ‘Who is that guy?’ ”

However, he said, “I really like the Presidential dollars, and use them regularly as real money.”

Author Ginger Rapsus said an 1849 3-cent piece pattern, Judd 113 (United States Pattern Coins, Experimental & Trial Pieces by J. Hewitt Judd, edited by Q. David Bowers) with a Roman numeral III on one side and the number 3 on the other is her nomination for ugliest coin.

There’s nothing ugly about the coin that is the centerpiece of Rapsus’ latest book, a novel about a woman who inherits an 1873-S Seated Liberty dollar. Wild World is available for Kindle on Amazon.com.