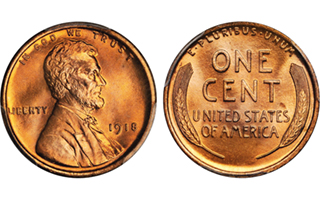 In 1918 more than 288 million Lincoln cents were struck at the Philadelphia Mint. In lower Mint State grades it remains a common coin, but like all copper coins nearly a century old with full Mint red color in nearly perfect grades, it’s a rarity in MS-67 red.

At Stack’s Bowers Galleries’ March 28 auction held during the Whitman Expo in Baltimore, a 1918 Lincoln cent graded MS-67 red by Professional Coin Grading Service and with a green Certified Acceptance Corp. sticker indicating quality within the grade sold for $14,100.

The firm described it as “a splendid piece with razor sharp devices, silky smooth surfaces and vivid bright orange luster,” adding that it is a “truly gorgeous Lincoln cent that will make a world of difference in an advanced Lincoln cent Registry Set.”

Registry sets by grading services PCGS and Numismatic Guaranty Corp. are a primary reason why top-graded coins have soared in price in recent years as they have tapped into a competitive instinct for collectors to compete to create the best set.