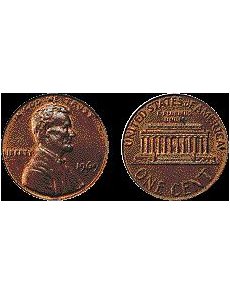 Among the highlights of the Presidential Collection of Lincoln Cents was a 1969-S Lincoln, Doubled Die Obverse cent graded AU-58 brown by PCGS that sold on eBay for $22,600.

In an interesting exercise in co-branding, David Lawrence Rare Coins and eBay together promoted the Presidential Collection of Professional Coin Grading Service Graded Lincoln Cents. The collection — which was available for bidding March 15 to March 25 — realized $687,300.81 at the auction’s close on eBay.

In an era of increasing buyer’s fees from major auction houses, a sale via eBay — where the seller pays the cost of sale — may prove increasingly attractive to collectors in the future.

The collection was featured on eBay’s home page at the start of the auction, promoting the sale as a unique auction event featuring 300 coins valued at over $1 million. While the sale didn’t reach that lofty goal, some very impressive prices were achieved by common coins in uncommonly high grades.

Among the highlights was a PCGS Mint State 67 red 1955 Lincoln cent, formerly in the Jack Lee Collection, with a PCGS population of just 14 coins and zero finer, that realized $4,900. For contrast, a PCGS MS-66 red example of the same date sold for just $65 on eBay in March.

Five separate bidders competed within the final five minutes for an MS-67 red 1955-D Lincoln cent that realized $4,806.80. PCGS has certified just 10 others in this grade with none finer.

Besides modern-era rarities, strong prices were seen for key varieties, such as a 1969-S Lincoln, Doubled Die Obverse cent graded About Uncirculated 58 brown that brought $22,600.

The PCGS Registry listed the set’s name as “Stokely” and ranks it as the world’s fourth all-time finest collection in its category, Lincoln Cents with Major Varieties, Circulation Strikes (1909 to present). The set featured an average grade of Mint State 66.204 with 98.68 percent completeness and 96.98 percent with full red coloration.

The set was described as “the crowning achievement of a serious collector who spent over 10 years assembling the finest Lincoln cents at auction and via private treaty.”

Collectors had the opportunity to bid on the collection at the Whitman Coin & Collectibles Baltimore Expo, March 22 to 24, through an eBay bidding station that was set up on the floor of the expo. ¦