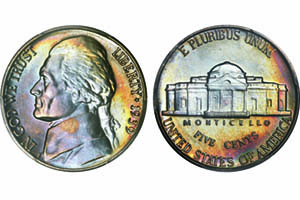 Of the two reverse subtypes used on 5-cent pieces in 1939, this is the more common one.

The lot description commented on the strength of the fully struck steps on Monticello, stating, “The Reverse of 1940 Jefferson nickels dated 1939 are noted for their strong, straight steps, though usually they are not this strong and straight.”

Another coin with lovely soft toning that brought a substantial amount was a 1951 5-cent piece in PCGS MS-67 full steps that sold for $16,450. Again, it’s the single finest example of the issue with full steps designation.

For a sense of the additional premium that collectors are willing to pay for the lone finest known example, consider that in different offerings in 2013, examples of the issue in MS-66 full steps brought $1,116.25 and $940.

An extraordinary representative of the World War II composition employed from 1942 to 1945, which contains 35 percent silver, was called by Heritage “The Ultimate War Nickel.” This 1944-D Jefferson 5-cent piece is one of eight examples of the entire Wartime composition that PCGS has graded MS-68 full steps and is the first that Heritage has offered at auction.

A magnificently toned 1945-P coin in PCGS MS-67 with vivid shades of orange, magenta and seafoam green brought $1,762.50, several multiples of what an untoned piece might bring. ¦