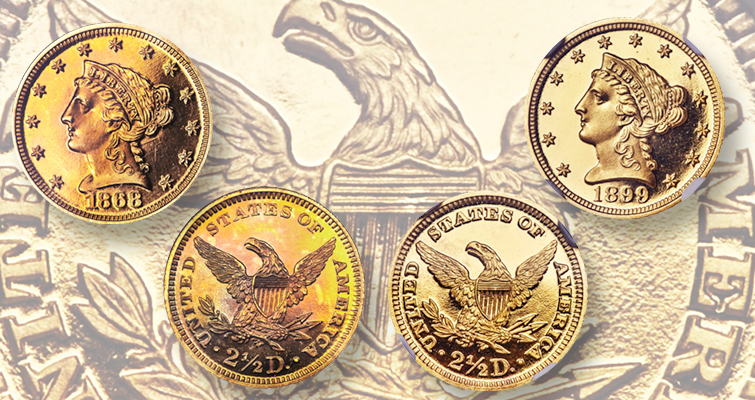 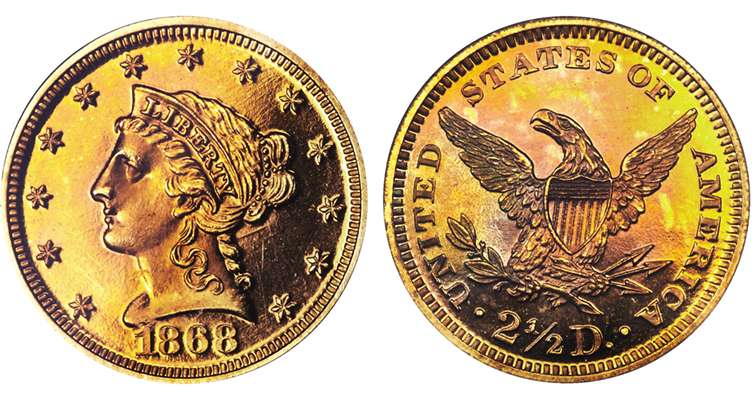 A handsome Proof 64 Cameo 1868 Coronet gold $2.50 quarter eagle is one of perhaps 20 surviving from an original mintage of 25 pieces. It will be offered at Heritage’s Dec. 13 Premier Session auction at its Beverly Hills offices. 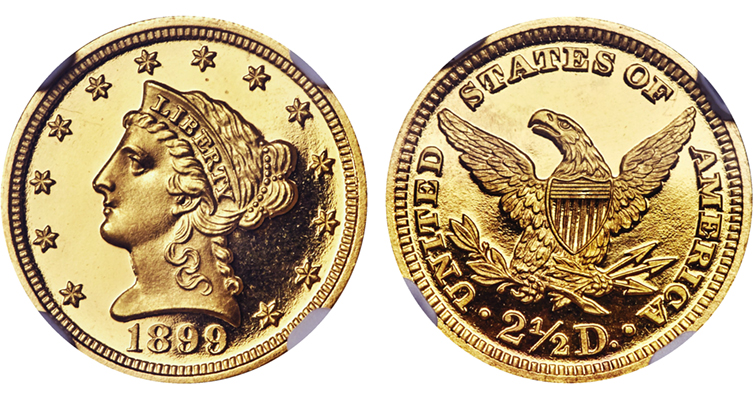 As expected, this Proof 69 Ultra Cameo 1899 Coronet quarter eagle is nearly flawless and is among the finest surviving examples of 19th century Proof gold in any denomination.

Two exemplary Proof Coronet gold $2.50 quarter eagles will be presented at Heritage’s Dec. 12 to 15 U.S. Coins Signature auction at its Beverly Hills, California, office as the sale closes out the 2018 numismatic auction calendar.

Just 25 Proof quarter eagles were struck in 1868, of which perhaps 20 survive today. The offering of one graded Proof 64 Cameo by Professional Coin Grading Service represents the first Heritage has handled in any grade since 2010, and it is one of three with Cameo contrast between fields and devices recorded on the PCGS Population Reports. PCGS has designated none Deep Cameo.

Heritage adds, “Fully struck design elements seem to melt into liquidlike fields amid rich tangerine-orange coloration,” further observing on the reverse, “some delicate gold, rose, and yellowish hues appear in the center.” The subject offering is one of just two 1868 quarter eagles certified by PCGS in this grade, with the other selling for $48,000 at Ira and Larry Goldberg’s June 2018 Pre-Long Beach auction. That description explained that the low mintages for Proof gold at the time reflected demand, “Simply put not many people in America could afford to buy and keep these early numismatic treasures. Only the richest folks were able to buy these, and not many did.”

By the 1890s coin collecting had increased in popularity and mintages for Proof gold coins moved up accordingly. The Philadelphia Mint struck 150 Proof quarter eagles in 1899 of which Jeff Garrett and Ron Guth estimate that around 100 survive, according to their Encyclopedia of U.S. Gold Coins. The combined PCGS and Numismatic Guaranty Corp. population reports record nearly 250 submissions of Proof 1899 quarter eagles, reflecting many re-submissions of the same coins and providing a false view of the rarity of this issue.

Heritage writes of the coin in its auction, “In addition to needle-sharp design elements and essentially flawless surfaces, it showcases dramatic field-device contrast and eye-catching appeal. The depth of mirroring in the fields is mesmerizing.”

The description is consistent with the NGC definition of the Proof 69 grade, which require a “fully struck coin with nearly imperceptible imperfections,” with NGC further defining Ultra Cameo (which it applies only to Proof coins) as follows: “The fields are deeply mirrored and the devices are heavily frosted for bold contrast on both sides of the coin.”

For a price reference Heritage cites an NGC Proof 68 Ultra Cameo example that it sold for $44,062.50 in October 2012, while a different example graded Proof 68 Deep Cameo by PCGS brought $45,600 at Stack’s Bowers Galleries’ March 2018 Baltimore auction.

Six other Proof Coronet quarter eagles will be offered in the auction, including an 1894 coin graded Proof 67 Ultra Cameo ? by NGC that has rich, yellow-gold color and outstanding eye appeal.

Collectors watching their wallet but still having an eye for quality may be attracted to a 1905 Coronet quarter eagle graded Proof 63+ Cameo by PCGS with a green Certified Acceptance Corp. sticker indicating quality for the grade. Heritage writes, “This deep orange-gold representative features profoundly reflective, textured fields and thickly frosted, razor-sharp motifs,” and a smattering of small contact marks accounting for the grade. 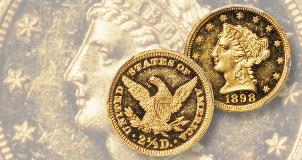 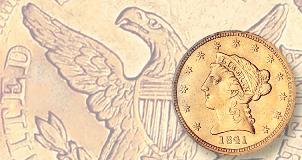 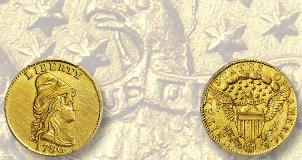