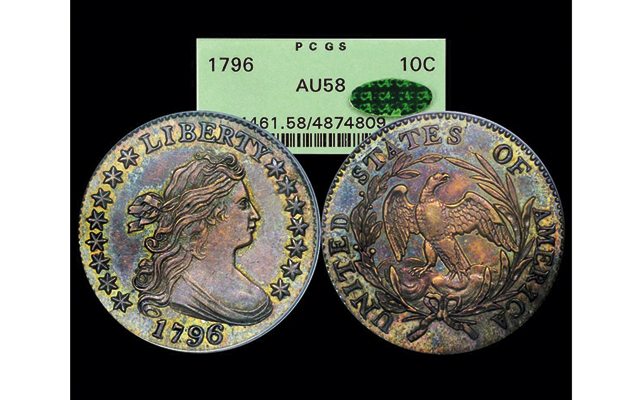 The well-struck AU-58 1796 Draped Bust dime in the collection of Mr. S. has more eye appeal and overall desirability than many pieces that grade a few points higher.

Last week I mentioned that, at dinner recently in New York City, I was seated next to Mr. S., who bought his first coin from me when he was 14 years old. Now a successful businessman and a true numismatic connoisseur, he showed me a picture of his beautiful About Uncirculated 58 1796 Draped Bust dime, which has more eye appeal than some Mint State 62 and MS-63 coins I’ve seen.

This week I illustrate the dime and let him tell you about his system:

“For each of the 5 categories I assign a number from 1 to 10 with 10 being the highest. The highest total for a given coin is 50. By the way, I never gave a coin a 50. Generally, if a coin grades under 25 I will typically pass on the coin. If the coin grades between 25 and 30 I may buy the coin. If a coin grades over 30 and I need it, I typically buy it. Eye appeal, originality, and toning are difficult to separate and are extremely important, so I heavily weigh those categories more so.”

Mr. S. starts with a certified coin and takes it from there. Beyond that, only a few pass his system! For Mr. S., an About Uncirculated 58 coin as shown here can be a better coin to own, and at a much cheaper price, than an MS-63 without eye appeal.

Mr. S. is not unique, although his numerical system may be. Robert G. Galiette, whose collection Stack’s Bowers Galleries will be selling at auction during the American Numismatic Association World’s Fair of Money in August, spent more than 20 years collecting double eagles — cherrypicking for quality. Often, 10 or 20 coins were examined before one that was just right was found.

Connoisseurship such as the above is even more important with paper money. Numerical grade is important, but equally or more important, in my opinion, are aspects such as brightness, sharp signatures (on hand-signed notes), and excellent centering. I would rather have a national bank note graded AU-55 with excellent attributes than an Uncirculated 63 national with faded signatures and irregular centering (such certified notes abound).

Finding coins and notes with great eye appeal and other characteristics costs no more! If there is a win-win situation in numismatics, this is it. There is a price to pay, however: time is needed and also education so you know what to expect.