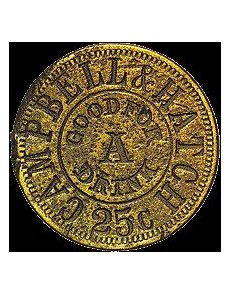 This token issued by the Campbell & Hatch Saloon and Billiard Parlor sold for $8,518.75 at auction. The saloon was where Morgan Earp was murdered in 1882 during a game of billiards.

All images courtesy of Holabird-Kagin Americana. 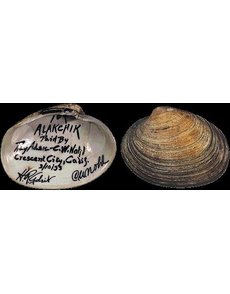 This clamshell, one of three examples of clamshell money offered in the March Holabird-Kagin auction, sold for $881.25. Clamshells like this one issued by a business in Crescent City, Calif., were used as a substitute for money during the Great Depression. 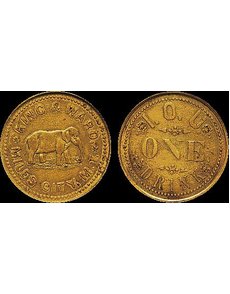 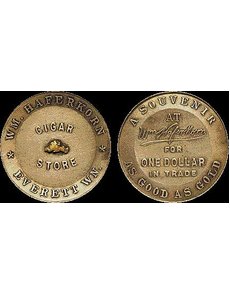 This 38-millimeter nickel token in the shape of a gold miner’s pan and featuring a tiny gold nugget sold for $8,812.50 at auction.

Possibly the best classic token from the Earp brothers’ era in the Wild West days of Tombstone, Ariz., sold for more than $8,500 at auction on March 30.

The uniface token was among the more than 1,100 lots offered in the Holabird-Kagin Americana auction conducted March 30 and 31 during the Western States Token Society’s Token Jamboree held at the Red Lion Hotel Conference Center in Sacramento, Calif.

The auction of tokens, photographs and Western mining-related memorabilia realized $236,000. All prices include the 17.5 percent buyer’s fee.

The text on one side reads CAMPBELL & HATCH 25C / GOOD FOR A DRINK. The other side is blank.

Bob Hatch and John Campbell were the proprietors of the saloon and billiard parlor on Allen Street in Tombstone, according to the auction catalog description. Hatch was a friend of both Morgan and Wyatt Earp, who were part of the gunfight at the O.K. Corral in Tombstone in 1881.

The catalog description describes what happened at the saloon on March 18, 1882, about six months after the famous gunfight: “Hatch was playing a game of billiards with Morgan Earp with Wyatt Earp in attendance. Suddenly two bullets shot through the glass of a locked door, one lodged in the wall above Wyatt Earp’s head, the other passed through Morgan Earp and lodged in a bystander’s thigh. The dying Morgan Earp was able to whisper to his older brother ‘I cannot stand. This is the last game of pool I will ever play.’ ” Morgan Earp was 31 years old when he died.

Two other tokens also sold for more than their estimates.

A 38-millimeter token composed of nickel, in the shape of a gold miner’s pan and featuring a tiny gold nugget, produced circa 1909, sold for $8,812.50. The token was issued by William Haferkorn for his cigar store in Everett, Wash.

One side of the token states A SOUVENIR / AS GOOD AS GOLD/ AT WM HAFERKORN / FOR / ONE DOLLAR / IN TRADE while the other side has the text ? WM. HAFERKORN / ? EVERETT WN., with CIGAR STORE at the center, the two words separated by the gold nugget.

A 32-millimeter copper token with the image of an elephant on one side sold for $8,812.50. The token was issued for the King & Ward Saloon in Miles City, Montana Territory.

The text on the side with the image of the elephant facing right is KING & WARD / MILES CITY, M.T. The text on the other side is I.O.U. / ONE / DRINK.

One of three examples of clamshell money, issued during the Great Depression by Crescent City and Pismo Beach, Calif., sold for $881.25. The clamshell was hand-painted on the underside 10C / ALAKCHICK / PAID BY / RAY ADSIT-CW. NOHL / CRESCENT CITY, CALIF / 3/10/33/ H.R. ADSIT C.W. NOHL.

According to the catalog, Ray Adsit was the proprietor of a garage and Nohl was an automotive repair clerk. Alakchick was the name of their business.

Seven Troughs was founded in 1905 and is located in Stone House Canyon 30 miles west of Lovelock, Nev. The town and mining operation were wiped out in 1912 after a “devastating flood from a great water-spout” washed everything away.

A photograph featuring Geronimo with three other Apaches sold for $3,172.50. The photograph, taken by Fly’s Gallery in Tombstone in 1886, shows the four men holding long rifles with a desert landscape in the background. A description printed on the front of the photograph states that Geronimo, his son and two other braves are depicted.

A photo of Geronimo sitting alone and holding a pistol sold for $1,410.

A rare Montana Territory token sold for $2,937.50. The eight-sided 28-millimeter white metal token was issued by John V. Petritz circa 1880 for the Vieanna Brewery.

A photo of downtown Tombstone, taken circa 1885, sold for $1,586.25. The photograph was taken from a vantage point at the Girard Mill overlooking the city. The mill began operation in 1882, according to the catalog.

A total of 325 bidders were registered, and more than 200 of those placed winning bids, according to the auction firm.

Some technical difficulties with an Internet connection at the hotel forced the auctioneer to use a wireless connection.

In some sections of the auction, Internet bidding accounted for about 75 percent of the bids, according to the firm.

For more information about the auction, visit the firm’s website at www.holabirdamericana.com or telephone the office in Reno, Nev., at 877-852-8822. ¦