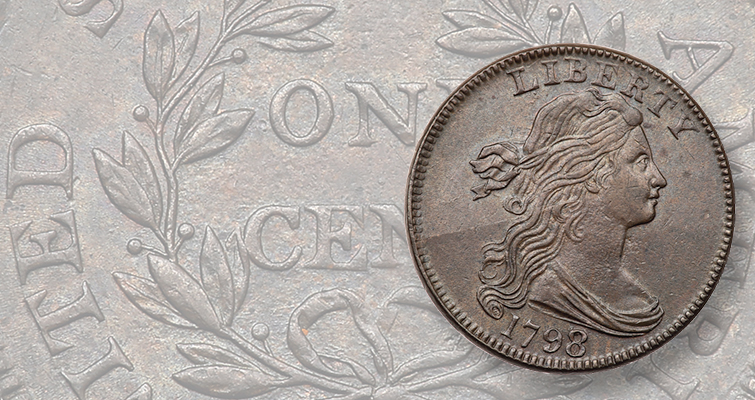 Tom Reynolds focused much of his early large cent collecting attention to the coins of 1798, including this 1798/7. 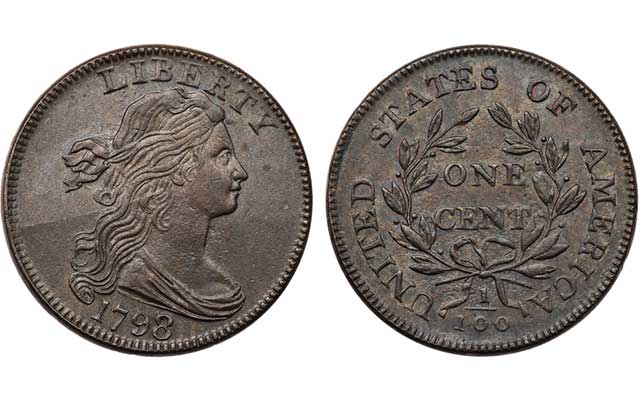 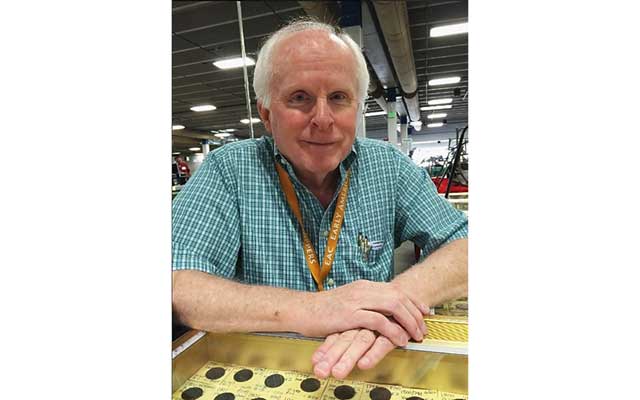 Omaha. Neb., dealer Tom Reynolds has been collecting early large cents for more than 50 years and a professional numismatist since 1986. 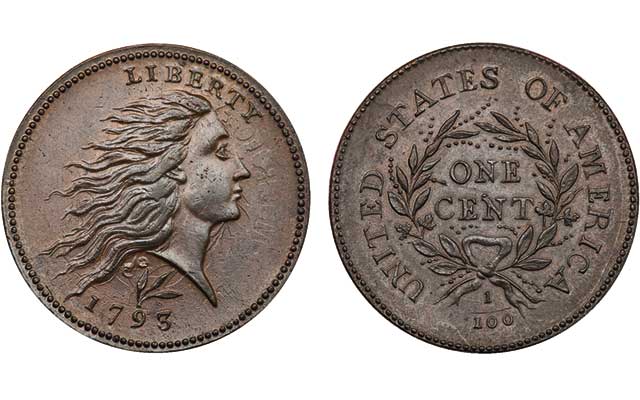 The 1793 Flowing Hair, Wreath cent, Sheldon 11b, is considered the finest known example of the variety. 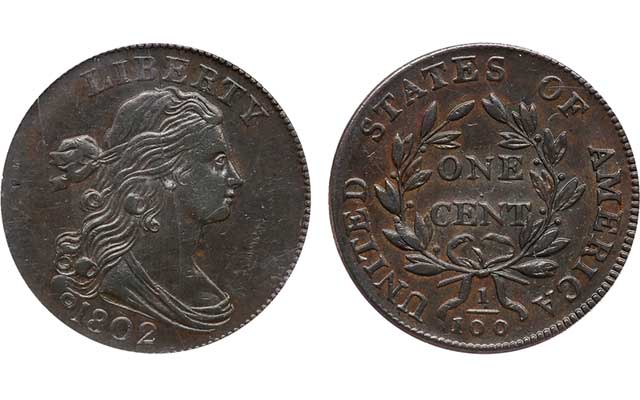 “I’d like to be involved as they move on to the next generation of collectors,” Reynolds said.

More information you can use: What are Early Date large cents?

The sales are to be conducted by Ira & Larry Goldberg Auctioneers in association with Kenneth Goldman Inc. Reynolds said he’s involved with selecting the coins to be offered in each of the two sales.

Bob Grellman from McCawley & Grellman, The Copper Specialists, will be cataloging the two auctions, according to Larry Goldberg.

The estimated value of Reynolds’ collection, which includes many finest known coins and pieces pedigreed to the stellar large cent collection of Roy E. “Ted” Naftzger Jr., is in the neighborhood of $10 million, according to Goldberg.

The coins in the collection have been submitted to Professional Coin Grading Service for grading and encapsulation.

Reynolds said he quickly realized, based on the number of coins and varieties necessary, and their availability, that the challenge was going to be monumental.

In addition, his initial focus was simply to obtain coins, without particular concern for the grade and condition as long as he had a representative example.

Reynolds said he subsequently decided to concentrate his attention on the early dates, 1793 to 1814, as attributed by William H. Sheldon in Penny Whimsy, initially titled Early American Cents. And he made condition and aesthetic appeal priorities in subsequent acquisitions. Reynolds sought examples that were in the top five or six rankings in the condition census for known varieties.

Reynolds said he knew that he would never be able to acquire some varieties, which is one major reason why he shifted his focus to quality, not quantity.

“There were so many coins that I’d need and to do so in the grade and quality I wanted would be cost prohibitive,” Reynolds said. Specializing allowed Reynolds to become proficient in a specific area of large cents.

According to Reynolds, of the just over 350 varieties in his collection, 302 are identified by standard Sheldon attribution and roughly 50 are attributed by noncollectible number (so-called because of the scant number of examples known). The remainder of the total 450 coins to be sold are duplicate examples, both of collectible and noncollectible varieties, he said.

Duplicates include die states of some varieties that illustrate the progression of the life of the dies used to exact certain varieties.

Like many collectors, Reynolds, a full-time professional numismatist in Omaha since January 1980, began his collecting with Lincoln cents and other U.S. coins, filling coin folders. That initiation began in 1952.

Soon after purchasing his first large cent in 1965, Reynolds said he began to quickly add coins to his large cent holdings. Reynolds, who earned a degree in actuarial sciences from Drake University, said he spent a lot of time attending shows and auctions.

Through the 1960s and 1970s, Reynolds maintained his intense collecting habits as he added to his collection. In January 1980, Reynolds became a part-time professional coin dealer, which afforded him greater opportunities not only to build a dealer inventory, but also add to his growing collection. Reynolds said he was working part-time as a professional numismatist while still maintaining his first career in the insurance industry.

Eventually faced with a decision between going into numismatics full-time or remaining in the insurance industry that he had spent a lot of time away from, Reynolds opted for numismatics on Nov. 1, 1986, and has been on the coin show circuit nationally since.

Being a collector and a dealer has proven to be something of challenge, Reynolds admits, and he has had to weigh whether a coin should be acquired for his collection or for his inventory, and whether to sell coins from his collection to other collectors.

In most instances when he sold a coin from his collection, it was an example for which he already obtained an upgraded replacement.

He found on occasion the opportunity to sell a coin from his collection to another collector without having a replacement coin. Reynolds said in some cases, he ended up repurchasing some of those coins from the collectors to whom they were sold.

Reynolds does have his favorite coins from the collection, which has more 1798 varieties than any other date.

One of those favorite 1798 varieties is the Sheldon 152, a 1798/7 Draped Bust cent that he purchased in December 1966 from celebrated Omaha dealer Aubrey Bebee. The coin is the finest known example of the variety.

For the Sheldon 169 variety of 1798 Draped Bust cent, Reynolds’ collection holds five of the top six coins in the condition census for the variety.

Many of the coins in Reynolds collection are pedigreed to the collection of Naftzger, who sold his collection in 1992 to numismatist Eric Streiner, from whom Reynolds acquired many key pieces.

Other pieces have been acquired in random private and auction transactions, but also include pedigrees to the collections of large cent collectors Walter Husak, Robinson S. Brown Jr., Jack Wadlington, and Dan Holmes, among others.

Learn about other large cent collections: