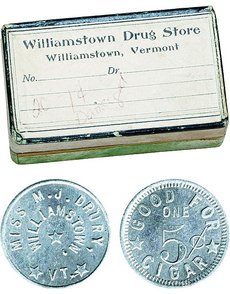 The Williamstown Drug Store box shown is the exact one that contained the Miller hoard of 48 Miss M.J. Drury aluminum tokens, an example of which is also shown.

My recent columns on hermit Alexander Kennedy Miller have drawn a lot of attention. Backed by an inherited fortune, Miller and his wife led a reclusive existence in Vermont, in rustic circumstances. After he and his wife died, outsiders inspected the premises.

More than 30 Stutz Bearcat automobiles were found, $1,000 bills, rare coins, millions of dollars in gold and securities, and 48 then unknown aluminum tokens.

“I always enjoy reading your Coin World columns, but your most recent one had a special meaning. I thought perhaps you’d be interested in knowing about my experience with A.K. Miller:

“My family has owned a house in Vermont since the 1950s. ... The water system consists of a primitive ram which pumps water, at a very slow rate, up to holding tanks in the attic.

“In the late 1960s my dad noticed a small classified ad in the Yankee Trader magazine offering to swap a ram for Stutz Bearcat parts ‘or $5 cash.’ My father sent him $5 ... [and said he] would like the ram and would pick it up eventually.

“My wife and I, who lived in the Boston area at the time, used to go to the [family] house frequently. ... One day, as we were leaving, my dad told me the ram story and asked me to pick it up if we got to that part of Vermont. We decided to do so. ...”

When he found the place, “There was what I remembered to be a large airplane hanger-like building, and a door at one end was open so I went in. There, a distinguished looking man in coveralls was working on an antique car. He stopped, and in a rather irritated tone asked what I wanted. I told him why I was there, and he remembered about the ram. While he was looking for it I asked him some questions about the car he was working on, and he realized that I knew something about old cars. ... So, he asked if we would like to see the rest of his cars, and he spent the rest of the afternoon showing us his collection. ...

“The man was obviously very eccentric. When I asked if he ever drove the cars he said that although he had rebuilt the engines in some of them, he had never started them. ...

“In addition to the cars, the walls were lined with rows of old porcelain license plates. ...

“At some point of our visit he asked what I collected. When I told him I was a coin collector he said if we ever got back this way to stop by and he’d show us his collection. Unfortunately, shortly thereafter we moved to Maryland and I never saw him again.”