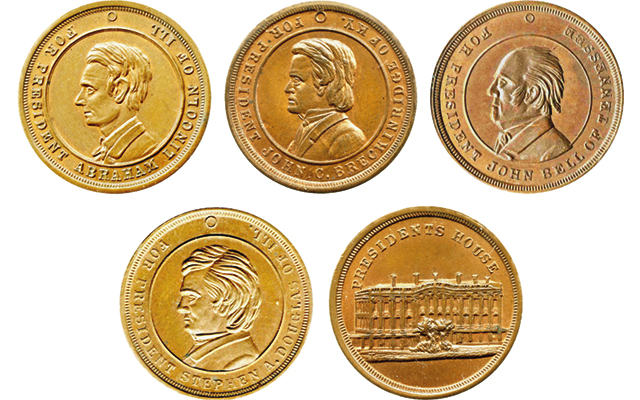 The four presidential candidates of 1860 were each represented on 22-millimeter tokens by the same maker, sharing a common Presidents House reverse. Each token had a small circle at the top that could be used as the target for a drill if the owner wanted to add a cord or ribbon. 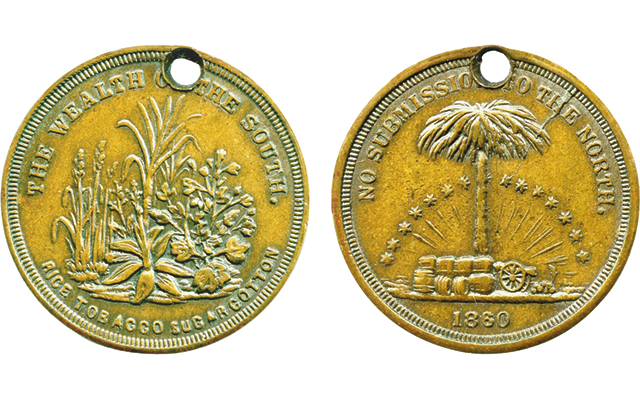 The 22-millimeter Wealth of the South tokens, made in the North in Cincinnati by private minter John Stanton, were best sellers in the South.

In 1860 in Cincinnati, die sinker and token maker John Stanton tapped the engraving talents of Benjamin True to create a series of 22-millimeter tokens. The first had the inscription WEALTH OF THE SOUTH and RICE TOBACCO SUGAR COTTON on the obverse and on the reverse NO SUBMISSION TO THE NORTH / 1860 with a palmetto tree and cannon.

Struck in brass and usually with a hole for suspension on a ribbon, these were sold by agents in the South. Declaring what many Southerners felt, the tokens were a great success. Later, as the political division became worse, Stanton opened a Southern mail address to receive orders in Covington, Ky.!

In the summer of 1860 the several political parties chose their nominations for the November presidential election. Benjamin True engraved dies for tokens portraying Abraham Lincoln (Republican Party), John C. Breckinridge (Southern Democratic Party), John Bell (Constitutional Union Party), and Stephen A. Douglas (Democratic Party) in profile on the obverse, with a surrounding inscription giving the name and state of each. At the top was a tiny circle, indicating a spot to drill if the recipient wanted to make a hole to accommodate a cord or ribbon. The reverse illustrated the White House, called the PRESIDENTS HOUSE on the token. The official name for the structure at the time was Executive Mansion.

These tokens were wholesaled at $5 per hundred to agents. Stanton reported some buyers were selling them for 15 cents each at the rate of 100 to 200 per day.

As might be expected, these were a hit with numismatists as well. Stanton, with an eye on that market, could not resist making illogical die combinations to sell to collectors, including an especially whimsical one with Abraham Lincoln on the obverse and NO SUBMISSION WITH THE NORTH on the reverse!

Fast forward to 2014. Numismatists still love them — that is, when they can be found. More next week.