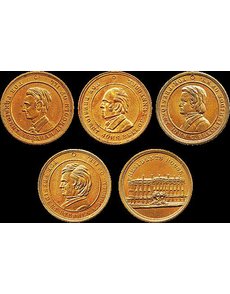 The four presidential contenders of 1860 — Abraham Lincoln, John Bell, John C. Breckinridge and Stephen A. Douglas — are depicted on tokens with a common “Presidents House” reverse from dies executed by Benjamin C. True.

Old tokens can be fascinating, one element being that a lot of mystery is associated with many pieces.

Recently, I mentioned the tokens from dies made by Benjamin C. True in 1860, with the obverse lettered THE WEALTH OF THE SOUTH, with rice, tobacco, sugar and cotton pictured, and the reverse with NO SUBMISSION TO THE NORTH, showing a cannon beneath a palmetto tree.

Struck by the shop of John Stanton in Cincinnati, these were popular with Southern sympathizers at the time. The Civil War did not commence until April 1861, and for a Northerner to sell Southern-sentiment tokens in 1860 was not disloyal. Quite a few Northerners sympathized with the South (and once war began, were called “Copperheads”).

In the summer of 1860, the presidential election of Nov. 7 was in the offing, and hopefuls in the North and South were well under way in their planning by the spring. Meetings and finally the nominating conventions were held. On May 18 Abraham Lincoln was chosen by the Republican Party, besting Salmon P. Chase and William H. Seward. The Democratic Party met in Charleston to pick a nominee, but confusion and dissension reigned and many delegates bolted.

The following advertisement was placed in a Richmond newspaper on Aug. 14, to run five times:

“Wanted — Agents to sell CAMPAIGN MEDALS. The likenesses of the candidates for President are correct. The price of the Medals is $5 per hundred. Agents are now selling from 100 to 200 per day. A specimen of either medal will be sent (by mail) upon receipt of the retail price, 15 cents. Address John Stanton, Stamp and Brand Cutter, 139 Fifth Street, Cincinnati, Ohio, August 14.”

The reference to “either” is not clear as it implies two tokens, not four. Perhaps either Bell or Breckinridge would have been chosen for their Southern appeal. This advertisement was found by the late Charles McSorley.

Does anyone know of similar notices published elsewhere?