Tips and methods for value-based collecting 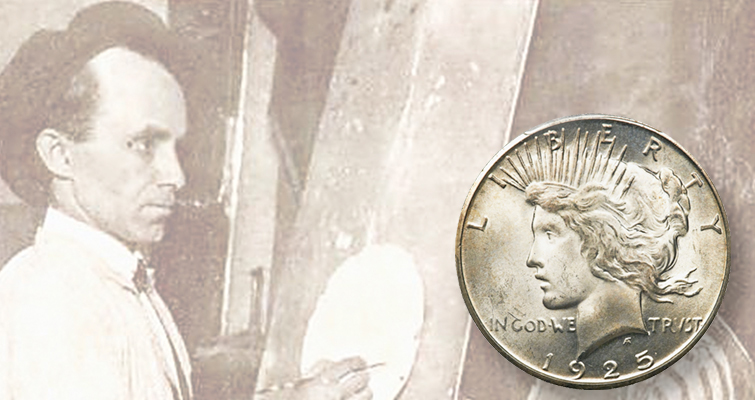 Collecting the short Peace dollar series is an enjoyable pursuit and one that is manageable by many collectors since the series has no great rarities. 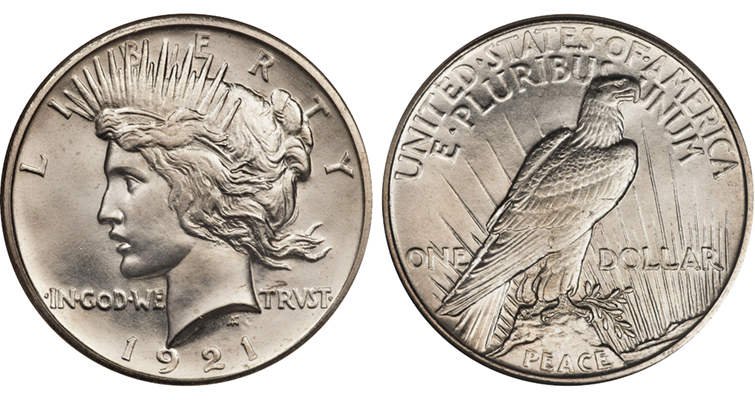 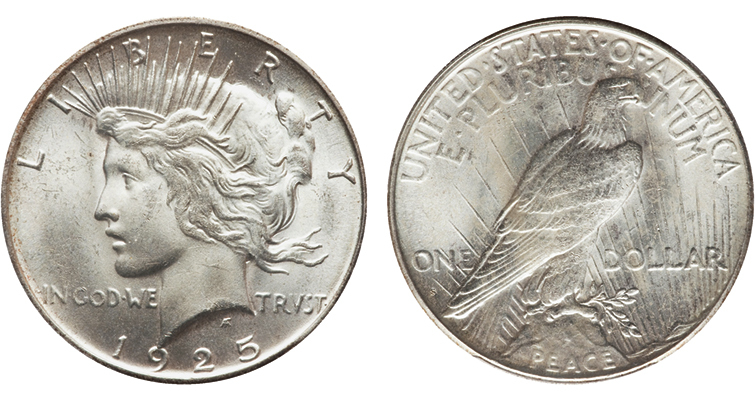 With some Peace dollars, small differences in quality mean huge jumps in price. This PCGS MS-64 CAC 1925-S Peace dollar sold for $1,292.50 at auction earlier this year. Compare this to the PCGS MS-65 CAC example in the next image. 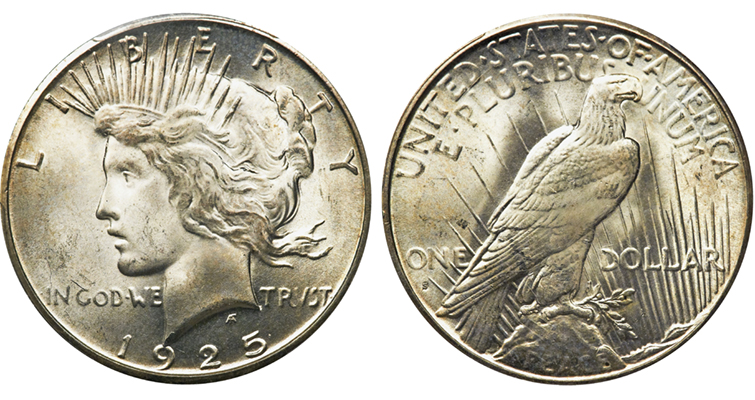 With some Peace dollars, small differences in quality mean huge jumps in price. This PCGS MS-65 CAC example brought $30,550. COmpare this coin to the PCGS MS-64 CAC 1925-S Peace dollar shown previously that sold for $1,292.50 at auction earlier this year.

In his foreword to Burdette’s Guide Book, Q. David Bowers wrote, “When I started in numismatics in the early 1950s, every bank had 1,000 coin sacks of silver dollars in its vaults.” At that time, many banks would let interested collectors sort through dollars to find key dates. Bowers recalled, “The Kingston (Pennsylvania) National Bank had quite a few bags of silver dollars. Among the mixed contents of Morgan and Peace issues were hundreds of as-new 1928 Philadelphia coins!” He added, “I could always recognize these, obverse or reverse, without even seeing the date, as they have beveled rims — very distinctive.”

Today, Mint State examples of common dates are plentiful and the Peace dollar is an unusual series in that it is limited and generally accessible to value-minded collectors because a full set of date and Mint marks has just 24 coins and no massive rarities.

In grades through About Uncirculated, only three issues cost more than $100. The 1921 Peace, High Relief dollar has demand from both type collectors and from Peace dollar aficionados and while a nice AU example might cost $125 or so, a quality Mint State 63 coin with a decent strike and good luster can be found with some searching for less than $500.

The key to the series is the 1928 Peace dollar with a series-low mintage of 360,649. The entire production was struck between April 13 and April 20, when the Philadelphia Mint ceased producing dollars until 1934. A lightly circulated choice About Uncirculated example can be found for $350, and while some MS-63 examples have sold for as little as $600 in recent auctions, a nice example may cost $700 to $800.

The 1934-S dollar has a mintage of 1,011,000 and is less than $100 in circulated grades until Extremely Fine. In Mint State it is scarce and any example is likely to cost more than $2,000. It is the most expensive issue in Mint State grades in the series until Mint State 64, when some other issues, common in lower grades, become condition rarities.

With the 1925-S Peace dollar, the rarity in top grades is a combination of a relatively low mintage of 1,610,000 combined with a nearly always very poor strike, meaning that MS-65 examples are the finest known.

For the collector looking for a solid example for type purposes, Mint State examples of the 1923 Peace dollar are especially plentiful with examples grading up to MS-66 widely available and examples grading MS-67 coming up occasionally. While a handsome certified MS-65 example can be found for $125, average MS-66 examples have sold at recent auctions for as low as $400.

A single article on a series as popular as the Peace dollar with such an incredible story cannot begin to be all-inclusive. There is exciting new research that has helped our hobby understand the transition between the 1921 High Relief dollar and the lower relief 1922 dollar.

There’s also the revisiting of the Peace dollar by the Mint in 1964, which led to a mintage of which no examples are known to have survived (and there isn’t even a picture of the estimated 322,394 Peace dollars produced at the Denver Mint in 1965). Despite this absence of photographic evidence, rumors persist in the hobby that some examples were saved, and that these survivors clandestinely rest in collections and trade privately in underground transactions.

Finally, there is a whole world of varieties, most relatively minor and available for little premium for the collector who wants to specialize in the series and understand the coin in detail.

Simply put, perhaps no 20th century series is as accessible and yet challenging as the Peace dollar.