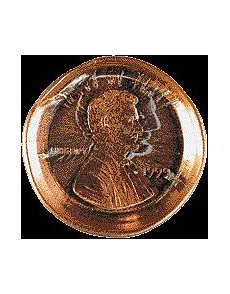 An extreme, but entirely conventional case of split plating doubling is seen on this 1999 Lincoln cent. A halo of exposed zinc surrounds Lincoln’s head. 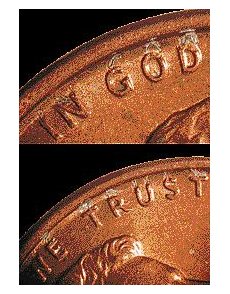 This 1994 Lincoln cent, submitted by Andrew Simpson, shows an extensive set of miniature letters that represent tears in the copper plating. 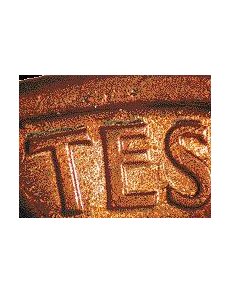 A conventional case of split plating doubling is seen in this 1991-D Lincoln cent. Only the tops of the letters TES are involved. 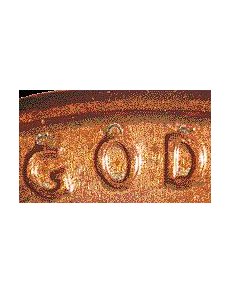 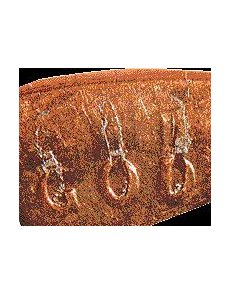 This broadstruck 1999-D Lincoln cent shows tiny, stretched-out letters of exposed zinc extending from their normal raised counterparts. They were generated as the copper plating snagged on sharp-edged posts and corners in the corresponding recessed letters of the die face.

One of the more common forms of doubling found among copper-plated zinc cents is “split plating doubling.” This form of doubling occurs as the thin copper plating is stretched beyond its tensile limit and splits.

Split plating doubling lies parallel to the margins of raised design elements. Owing to the abrupt change in topography, tensile stresses are magnified in these areas. Since expansion of the coin (and its plating) occurs in a radial (fanwise) fashion, the split should be as large or larger than the feature it lies next to.

These predictions are borne out by the 1999 Lincoln cent shown here. This expanded, strongly cupped broadstrike has developed a wispy corona of exposed zinc that surrounds and parallels the outline of Lincoln’s head.

I recently received a 1994 Lincoln cent whose pattern of exposed zinc differs significantly from the foregoing example (see photos). It was found in a roll of cents a few weeks ago by Andrew Simpson. At first glance, it seems to be an ordinary cent. But between the design rim and the raised letters of IN GOD WE TRUST, is an array of duplicate letters, strongly offset from their normal raised counterparts.

While the extra letters represent breaks in the copper plating, their size and shape confound expectations. Each letter is significantly smaller than its normal companion. The letters are also surprisingly complete. For example, the first T of TRUST has a vertical bar as well as a crossbar. Theoretically, split plating doubling should only involve the outermost portion of a letter. So there should only be a split paralleling the crossbar of the T.

A typical pattern of split plating doubling involving a peripheral letter is seen on the reverse of an otherwise normal 1991-D Lincoln cent. The splits are confined to the tops of the letters of STATES and simply parallel the outermost contour of each letter.

Simpson’s cent had me going back to my reference collection and pulling out a second 1994 cent that shows a very similar pattern of zinc exposure. This example was struck by a different die and its array of tiny letters is far less extensive. Here a tiny G and O surmount the corresponding raised letters of GOD.

In both of these 1994 cents, the small letters appear to be gouged into the copper, rather than exposed by stretching of the copper.

These tiny letters of exposed zinc could be explained once I realized that split plating doubling actually involves two sources of stress. In addition to the tensile stress mentioned earlier, direct physical trauma results from the copper plating snagging on sharp edges located at the margins of recessed design elements in the die face. At the periphery of the obverse face, the copper plating sometimes tears as it catches on the small posts and corners of the sunken letters of IN GOD WE TRUST. Rounded letters like O and G have a central post, while angular letters like T have two sharp corners.

When the copper plating snags on these sharp edges it rips open, producing small, letter-shaped areas of exposed zinc.

Further evidence in support of this idea can be found in conventional off-center strikes and broadstrikes. The illustrated broadstruck 1999-D Lincoln cent shows tiny, stretched-out letters of exposed zinc extending from the raised letters of IN GOD WE TRUST.

The diminutive letters of the two 1994 cents are not stretched out because both were struck within the collar, limiting expansion.