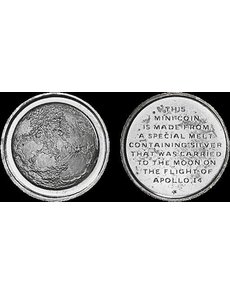 This small, 13-millimeter medal (obverse and reverse shown) was created by the Franklin Mint in the 1970s, using an alloy containing metal flown in space. The medal can be inexpensively purchased in Internet auctions.

Having just read the “Collecting the final frontier” article by William T. Gibbs in the May 6 Coin World reminded me of a small medal that was issued by the Franklin Mint in 1971 commemorating the fight to the Moon. What may be the interest in this medal and its value?

The private Franklin Mint made a number of spacecraft relic medals during the firm’s heyday in the 1960s and 1970s.

Relic medals are pieces containing metal or other substances recovered from famous ships, spacecraft or important historic artifacts, or from historic sites.

Relic medals fall into three broad categories: one, with metal that was once actually a part of the artifact added to the alloy used to make the medals, so that each medal contains some amount of recovered metal; a second, in which a piece of recovered metal is embedded directly into the surface of the medal; and a third, made from an alloy containing a portion of metal carried aboard a famous naval or space craft.

Your piece is an alloy example that features an image of the Moon on the obverse and a legend on the reverse explaining its metallic content: THIS MINI COIN IS MADE FROM A SPECIAL MELT CONTAINING SILVER THAT WAS CARRIED TO THE MOON ON THE FLIGHT OF APOLLO 14.

A Mint mark for the Franklin Mint is at bottom center on the reverse. The design of the medal was engraved by artist Fritz Weiland.

Crewmembers of the Apollo 14 mission carried with them a small amount of metal that was later added to the sterling silver alloy used in striking this medal.

The small flip holder created by the Franklin Mint was dated Aug. 28, 1971, and states on the Certificate of Authenticity that the medal was created “from a special melt of silver into which was placed 10,000 grains of silver carried aboard Apollo 14 on its voyage around the moon.”

This medal is an interesting historical piece, but one that holds a minor value. Some of these medals have sold recently in Internet auctions in the $10 to $20 range.

Two of the astronauts, Shepard and Mitchell, made two space walks on the lunar surface after their Feb. 5 arrival. All three returned back to Earth on Feb. 9.