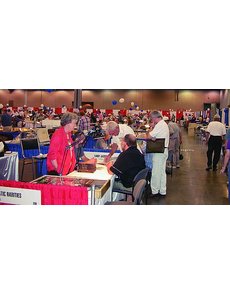 Shopping at a coin convention can be fun, as shown here on the floor of the Whitman Atlanta Coin and Collectibles Expo in June 2004, but many more people take advantage now of buying coins from dealers on the World Wide Web.

The world is changing — that we all know. Although labor-saving devices are in greater profusion than ever before, somehow in 2012 time is also more precious than ever before. Much of our available “capital” in terms of hours per day is spent on electronic media — television, iPhones, the World Wide Web and more. Less time is spent on travel.

In terms of numismatics the computer age has been a dynamic portal to the marketplace. Who would have dreamed a generation ago that, if you wanted to buy, for example, a 1955 Lincoln, Doubled Die Obverse cent, with a few clicks on your computer keyboard you could find quite a few offered, and if you desired something numismatic that is fairly common, say an 1884-CC Morgan dollar in Mint State, you would have hundreds of choices.

Any coin auction house can tell you stories of “public” auctions where just a handful of people were present in person, and yet record prices were established.

This happened quite recently with Stack’s Bowers Galleries when an incredible offering of Civil War related monetary substitutes — printed envelopes, scrip and the like — crossed the block.

Not many faces were in the audience, but thousands of people were tied into the World Wide Web for these and other offerings, and runaway record prices were achieved.

In fact, today, far more lots are sold to bidders on the Web than are sold to floor bidders in auction galleries.

People are electing to stay at home for other activities. I recently read that in the past decade the square footage of available convention exhibit hall space in the United States has increased by more than 30 percent.

However, the number of people attending trade shows is lower than it was 10 years ago. “If you build it, they might not come,” seems to be the rule.

In any event, coins can be enjoyed at home or at a show.

Take your pick or, better yet, do some of each.