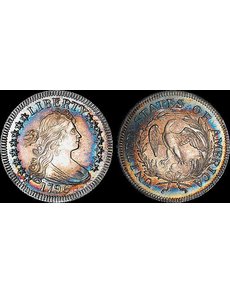 Once every decade or so, the opportunity arises to attend an auction that not only offers interesting coins but is an event to be recalled for the rest of a collector’s life. Such was the case Nov. 15 and 16 for the Eric P. Newman auction in New York City by Heritage Auctions.

This selection of U.S. coins had more than one auction’s share of incredible coins.

As everyone should know, many of the coins were once the property of renowned collector Col. E.H.R. Green and have been in the Newman Collection since the early 1940s. This offered the opportunity to view coins that have not seen the light of market exposure for more than a collecting generation. Foremost in the interest of Bust coinage collectors were the amazing quarter dollars, many of which traced their pedigree to Ard Browning, author of Early Quarter Dollars of the United States 1796-1838, published in 1925.

Collectors had been in the dark regarding the location of many of the coins illustrated in Browning’s work, until Rory Rea photographed Eric’s coins for the 2010 work Early Quarter Dollars 1796-1838 by Rea, Glenn Peterson, myself, and John Kovach Jr. Rory’s quality photos reintroduced these wonderful coins to collectors.

The auction was the first opportunity to own one of these beauties in the better part of a century.

There is little doubt that they were dipped in a type of cleaning solution decades ago and many exhibited some hairlines from being wiped, as was the custom in “ancient” times. Their storage in Wayte Raymond type albums for decades produced some incredible rainbow bull’s-eye toning. The competition on these coins was fierce, with record-setting prices being the norm. The 1796 Draped Bust, Small Eagle quarter dollar, the cover coin from our book, sold for $1,527,500.

The Bust dollars were also in amazing states of preservation, many being the finest known for their marriage. They also sold for record-setting prices. How often can one buy the finest Uncirculated Bust dollar, which no one had seen in more than 75 years?

I would highly suggest taking advantage of the next opportunity you have to view a major “event” auction collection before it is dispersed into hiding for another generation.

The chance to learn about the best coins will help you in your collection pursuit, even if you are only able to purchase much less valuable coins. You can get a feel for the collecting philosophy of an advanced collector and what it took to assemble his collection.

It will inspire and influence your collecting decisions for the rest of your career.