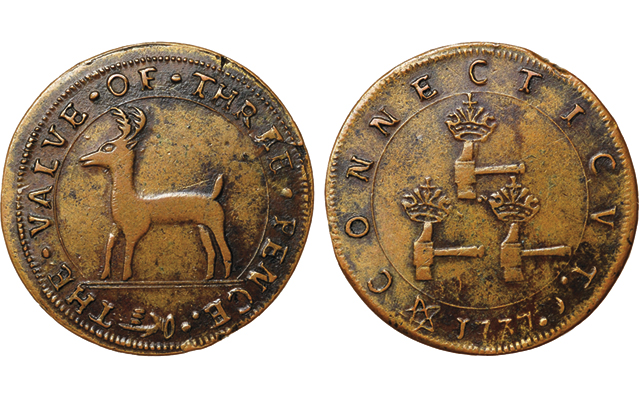 This 1737 Higley copper, graded About Uncirculated 50 by NGC, is considered one of the finest known examples. It sold for $470,000 in the May 16 to 17 Heritage Auction of selections from the Eric P. Newman Collection IV auction.

Raise a glass — it’s only fitting — to the memory of Dr. Samuel Higley, who coined an odd denomination token in an odd place for an odd reason.

Higley, who was born in colonial America in 1687, abandoned medicine for metallurgy, and in 1727 opened his own copper mine near Simsbury, Conn.

The mine produced vast quantities of ore that was used locally and exported to England.

Higley coined tokens with a stated value of threepence from his metal. The tokens had an obvious problem: They were the size of a half penny.

Sylvester S. Crosby, in his groundbreaking Early Coins of America, recounted, “We have heard it related of Higley, that being a frequent visitant at the public house, where at that time liquors were a common and unprohibited article of traffic, he was accustomed to pay his ‘scot’ in his own coin, and the coffers of the dram-seller soon became overburdened with this kind of cash, [an experience not at all likely to cause trouble to collectors of the present day] of the type which proclaims its own value to be equal to what was then the price of a ‘potation,’ — three pence.

“When complaint was made to Higley, upon his next application for entertainment, which was after a somewhat longer absence than was usual with him, he presented coppers bearing the words, ‘Value me as you please’ ‘I am good copper.’ ”

Higley died in a shipwreck in 1737, but coinage continued under his brother for two more years.

Because Samuel died early in 1737, some doubt he had anything to do with the tokens. The story, though, has taken on a life of its own.

While the Higleys struck tokens in 15 die combinations, fewer than 65 tokens of all types are known to exist today. Damaged tokens fetch $25,000 and up. Better condition coins top $200,000 in price.

Crosby said the coins were scarce, even in the early 1800s, when they were valued for their utility rather than as collectible coins.

In his 1875 book, Crosby wrote, “These coppers, owing to the fine quality of the metal of which they were composed, were much in favor as an alloy for gold, and it is probably due in part to this cause that they are now so extremely rare.”

In 1773, the Connecticut General Assembly purchased Higley’s mine for use as “a public gaol and workhouse.”

Inmates of the infamous New-Gate Prison, Crosby said, included burglars, horse thieves and counterfeiters. During the American Revolution, captured British soldiers and unrepentant Torries were put to work in the prison mine, too.