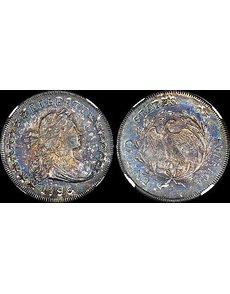 The finest known 1796 Draped Bust, Small Date, Small Letters dollar was purchased for $1,175,000 for a collector building a high-quality set of Bust dollars. 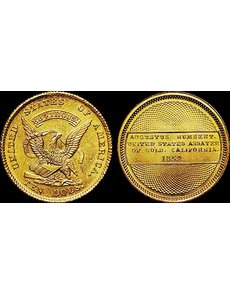 A collector who is relatively new to the hobby paid $1,057,500 to acquire this 1852 Augustus Humbert, United States Assayer of Gold $10 coin that was once Humbert’s personal specimen. 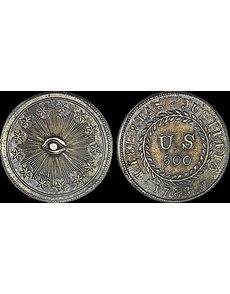 The 1783 Nova Constellatio Type II quint has a new home after its April 25 purchase for $1,175,000, ending Walter Perschke’s nearly 34-year ownership of the coin.
Previous
Next

While much of the collector attention was focused April 25 on Heritage Auctions’ sale of the George Walton 1913 Liberty Head 5-cent coins, three other coins topped the $1 million barrier.

The 1796 Draped Bust dollar, cataloged as Bowers-Borckardt 63 in Silver Dollars & Trade Dollars of the United States, A Complete Encyclopedia by Q. David Bowers, with Mark Borckardt, is the finest known example of the die marriage.

John Albanese, a dealer who founded CAC in 2007 and was involved in the start-ups of PCGS and NGC in the mid-1980s, purchased the 1796 dollar as agent for a major collector of Bust dollars. The collector, who is trying to assemble a high-quality set of Bust dollars, wishes to remain anonymous, Albanese said.

Albanese said he initially placed bids online, but switched to the telephone, via which he placed his bids with Todd Imhof, Heritage’s executive vice president. Imhof executed Albanese’s bids on the auction floor.

It took roughly 60 seconds for the unique 1783 Nova Constellatio quint pattern that Chicago collector and dealer Walter Perschke owned for more than 30 years to find a new home for $1,175,000. Don Kagin and David McCarthy from Kagin’s in Tiburon, Calif., placed the winning $1 million bid.

For Perschke, it was bidding farewell to a coin he paid $55,000 for when he purchased the coin in November 1979 from The Garrett Collection Part I sale by Bowers and Ruddy.

“I didn’t really intend to hold the quint as long as I did. It just worked out that way,” Perschke said. “The quint has incredible historical significance that has been virtually ignored in the numismatic market. It is the foundation of our decimal system of coinage and the U.S. dollar, which became the reserve currency of the world.”

The morning of the April 25 auction, Heritage Co-Chairman Jim Halperin informed Perschke the firm had received a bid of $625,000, below Perschke’s reserve. Halperin encouraged him to consider dropping the reserve to $625,000 so bidding could open with a live bid, Perschke said. However, “There was an additional bid that came in at $650,000 prior to the floor bidding and that became the starting bid,” Perschke said. “The bidding increment on the floor was $50,000 and with five bidders, the bidding very quickly reached the $1 million hammer price.”

The piece is cataloged as Kagin 10 in Private Gold Coins and Patterns of the United States.

The coin brought a final bid of $900,000, with the buyer’s fee bringing the total to $1,057,500. The final total is believed by Heritage officials to be the highest price paid at auction for a single pioneer gold piece.

The winning bid was placed by a phone bidder, according to Heritage.

Halperin said May 1 the buyer wishes to remain anonymous. The Heritage official described the new owner as “a private collector, relatively new to numismatics, who was taken with the history and the extraordinary story of the Humbert $10.”

Stuart Levine, the Massachusetts numismatist who is serving as consultant for the sale of select items from the Newman Collection, said he is “delighted that these wonderful coins can now be appreciated by other collectors as they have been by Eric for so many years.”

Items being sold are from the collection assembled by Eric Newman over a period of 90 years. ¦