Three of the top lots at Heritage's Feb. 2015 PNG auction 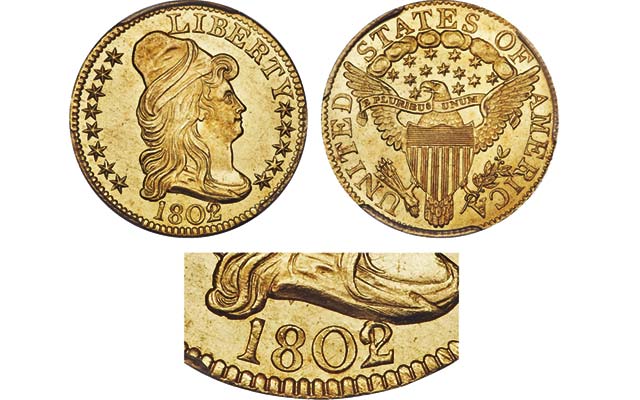 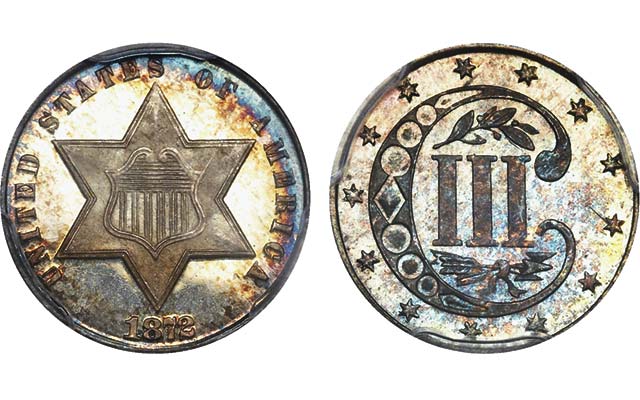 Heritage’s Feb. 26 to March 1 Professional Numismatists Guild Invitational auction in metropolitan Dallas totaled more than $6.5 million as of March 3. The Heritage auction was held in conjunction with the inaugural spring PNG Invitational, following the first PNG show this past fall in New York City. The spring show was held at the Gaylord Convention Center and Resort in metropolitan Dallas, Feb. 26 to 28.

It came from a relatively high mintage of 50 Proof examples, although it is comparable in rarity to other dates with lower mintages of 25 to 30 coins as was typical during the period. Heritage notes, “Produced chiefly for inclusion in proof sets with the other gold denominations of the period, the proof ten dollar pieces are every bit as rare as their sought-after double eagle counterparts, and in many cases are rarer.”

The coin has long been popular with collectors, in large part due to the clarity of the overdate that is clearly visible to the unaided eye. The example offered sold for $58,750.

The shimmering piece was described as a high-end Choice example, with “vibrant satiny mint luster and well-preserved antique-gold surfaces that show a few barely perceptible traces of planchet adjustment marks in the obverse fields.”

PCGS has graded none finer and it was from a small mintage of just 1,000 pieces. 1872 was the final year that the tiny silver denomination, sometimes referred to as a “trime,” was produced in regular-issue format, with the final year of the denomination, 1873, struck in Proof-only format.

The example just sold is among the finest known, with PCGS grading two in MS-67, one in MS-67+ and none finer.

Among the 20th century condition rarities on offer was a 1952-S Franklin half dollar certified MS-67 full bell lines by PCGS with a green CAC sticker.

Although at 5.5 million the mintage for the issue was relatively small, well-struck examples are rare and this coin tied with one other in this grade as the finest certified by PCGS. The toned half dollar, described as worthy of “the finest collection,” sold for a strong $21,150. Surprisingly, it had last sold in a Nov. 6, 2014, Heritage auction for $25,850.