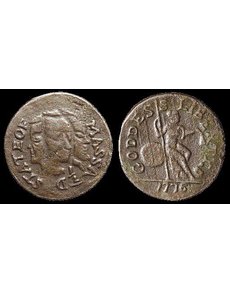 A copper submitted by a reader is almost certainly a modern-day reproduction of a 1776 Massachusetts copper. The original piece, incorrectly called a “Janus” copper, is unique and last sold in 1979 for $40,000.

I found this coin while looking through a friend’s small coin collection. He asked me to investigate its value.

“It’s absolutely, 100 percent, a modern counterfeit. It may or may not have been made before the Hobby Protection Act [of 1973], but this particular copy has been offered by historical gift shops and plaguing coin dealers for decades. It was produced by a crude casting method.”

In a July 5, 2010, Coin World article, Paul Gilkes discussed three unique Massachusetts Colonial coppers — the Pine Tree copper, the Indian copper and the “Janus” or half penny copper — all dated 1776. Regarding the “Janus” copper, upon which Mr. Yoder’s counterfeit piece is based, he wrote:

“The Three Heads on Obverse design, is sometimes referred (incorrectly) to as the ‘Janus copper’ or halfpenny. It bears a three-headed obverse device (instead of two as on a true Janus head design), with one head facing left, a second head facing front and a third head facing right. Inscribed around is STATE OF MASSA., and 1/2 D.

“The reverse depicts Liberty seated facing right on a globe, her left hand extended and a staff in her right splitting the S’s in the border inscription, GODDESS LIBERTY.

“Bowers and Ruddy sold an example of the Three Heads on Obverse copper for $40,000 as part of Part I of the auction of the Garrett Collection, conducted Nov. 28 and 29, 1979. The Garrett catalog suggests that the 1776 pieces were likely patterns.

“The Janus Head piece is still privately held by the advanced Colonial collector from New York who purchased it at the Bower and Ruddy auction in 1979.

“Sylvester S. Crosby, in The Early Coins of America, states: ‘This piece, which has been known as the ‘Janus copper,’ we think may more properly be called the Massachusetts Halfpenny. It has three heads combined instead of two as in a Janus head. This device resembles the Brahma of Hindoo mythology, which represents the past, the present and the future.’

“The Janus copper sold in the 1979 Garrett auction was once in the collection of prominent 19th century Salem, Mass., numismatist Matthew Stickney. Crosby writes that Stickney suggested the possibility that the piece was the work of Boston silversmith Paul Revere, since the Janus piece was discovered on an unknown date along with some proof impressions from plates for Continental paper money engraved by Revere.”