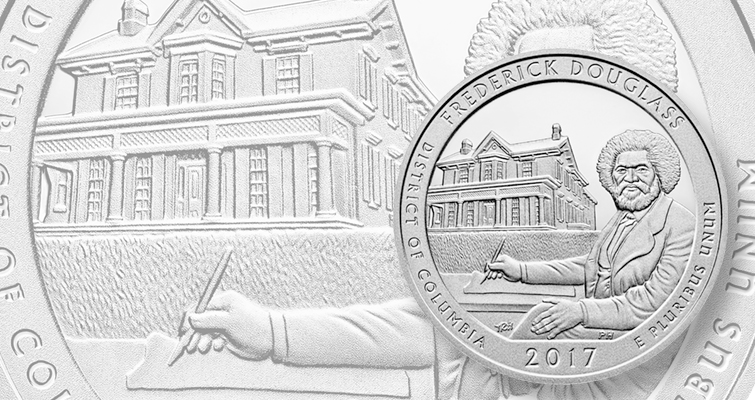 Three different versions of the Frederick Douglass National Historic Site quarter dollar will be held in a three-coin set going on sale from the U.S. Mint April 24.

The United States Mint will open sales for the 2017 America the Beautiful Quarters Three-Coin set for the Frederick Douglass National Historic Site coin on April 24 at noon Eastern Time.

The coins are held in a plastic card with an image of the Frederick Douglass National Historic Site. A certificate of authenticity is printed on the back of the card.

The reverse design of each quarter dollar depicts Frederick Douglass seated at a writing desk with his home in Washington, D.C., in the background. Inscriptions are FREDERICK DOUGLASS, DISTRICT OF COLUMBIA, 2017, and E PLURIBUS UNUM.

Douglass is widely considered one of the most influential Americans of the 19th century. He was born a slave circa February 1818 in Maryland on the eastern shore of the Chesapeake Bay, in Talbot County. At about the age of 12, the sister-in-law of the woman who owned him began teaching him the alphabet, though she later stopped his lessons because of her husband’s objections that slavery and education were incompatible. Nonetheless, Douglass defied the sentiments of the slave-owning society and continued to learn to read by observing white children and the white men he served. He also began teaching other slaves to read as well.

In September 1838, Douglass successfully escaped slavery by boarding a train traveling north. After a journey aboard several trains, a steam-ferry, and by foot, he reached Philadelphia and then New York City.

He became preacher in 1839 and began improving his oratorical skills, while also becoming increasingly involved in the abolitionist movement.

Douglass became a skilled writer and would eventually write three autobiographies; his first, Narrative of the Life of Frederick Douglass, an American Slave, was published in 1845.

In the name of abolition, he would travel the nation and later Europe, though not without some personal cost. During an 1843 tour of the free states, he was assaulted by a pro-slavery mob in Indiana and received injuries to a hand that he suffered from for the remainder of his life.

In the mid-1840s, following a tour to Europe, Douglass founded the famed abolitionist newspaper, The North Star. He would also publish other newspapers.

During the 1850s, he became an increasingly influential force in the abolitionist movement, as well as a supporter of women’s rights. While he met with abolitionists like John Brown who advocated an armed slave rebellion, Douglass objected to Brown’s attack on the federal armory at Harper’s Ferry, Md.

When the Civil War broke out in 1861, Douglass joined others in advocating that black Americans be allowed to enlist in the Army.

After the end of the war, Douglass continued to advocate suffrage for not only black men but for women as well. 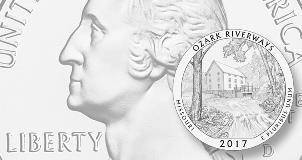 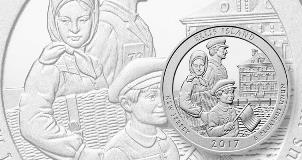 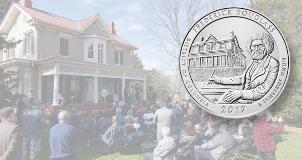