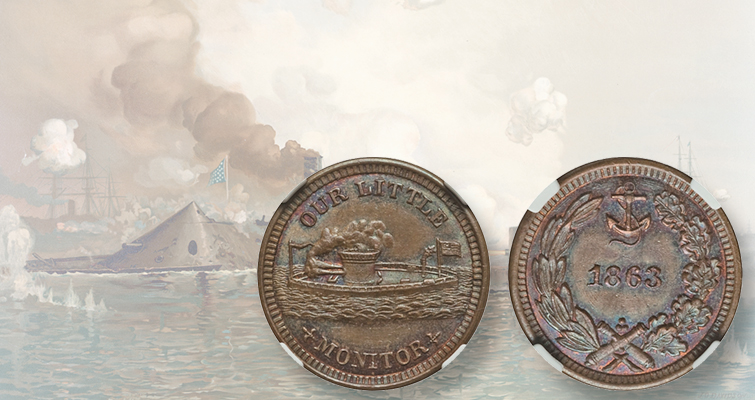 The final day of conflict the Battle of Hampton Roads, on March 9, 1862, ended with neither the Union Monitor or the CSS Virginia able to strike a decisive blow. Civil War tokens issued in the North hail “Our Little Monitor” in a patriotic scene.

The importance of the American Civil War cannot be overemphasized.

The struggle that pitted brother against brother and rent the Union into North and South exploded in the spring of 1861 and continued for nearly four years. The fissure threatened the existence of the United States but the nation ultimately was preserved, and the entirety witnessed the granting of freedom to nearly 4 million slaves.

In this war, on March 9, 1862, the first battle between two ironclad warships concluded after more than a day of fighting.

The day before the two ironclads dueled, the Virginia had destroyed two conventional wooden hulled Union vessels with little damage to the Confederate vessel. When the Monitor arrived on the scene the next day, with an innovative rotating turret containing a pair of guns, the two vessels fought to a standstill. Navies worldwide recognized that wooden-hulled ships had just become obsolete and began accelerating what until then had been modest efforts at modernizing their fleets.

The battle is famously referenced on Civil War tokens that were issued in the absence of small change during the war.

Civil War tokens were small cent sized pieces, issued predominantly in Northern states in the Eastern part of the country, with a particular abundance from New York and Ohio.

Two types of tokens were issued, those with patriotic messages of support for the Union cause (like the one issued for the USS Monitor), and those for specific merchants who used them as advertising pieces. These categories today are called “patriotics” and “storecards.”

A famous Civil War token design referencing the battle shows “Our Little Monitor” on the obverse. Numerous reverse designs are found with this common obverse. 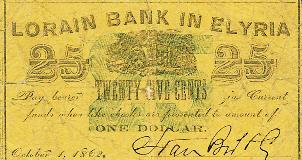 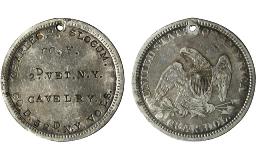 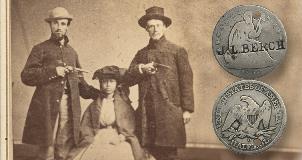