This Day in History: April 19 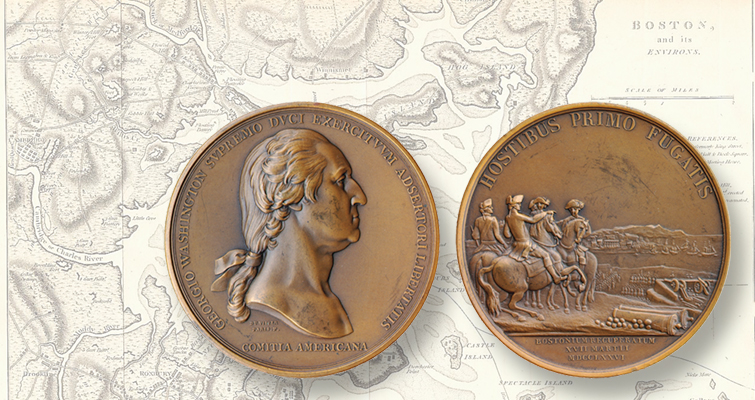 The Washington Before Boston medal was the first congressionally approved medal of the young United States. Gen. George Washington was awarded an example of the medal in gold for his efforts during the Siege of Boston, which began on April 19, 1775.

Medal images courtesy of the Department of Special Collections, at the University of Notre Dame Libraries.

One of the earliest major military events during the American Revolution became the first subject for honorary medals issued by the young American Congress.

The siege of Boston began April 19, 1775, when British forces withdrew back to the city following the battles of Lexington and Concord.

Americant troops controlled land access to the city during the siege, which lasted until March 1776, after bookseller Henry Knox brought reinforcements in the form of heavy artillery from Fort Ticonderoga to defend Dorchester Heights, a point south of the city.

Gen. George Washington’s men turned back a British assault, and on March 17 the British evacuated Boston, a day now celebrated as Evacuation Day.

In recognition of Gen. Washington’s leadership, the Continental Congress voted March 25, 1776, to present what has come to be known as the Washington Before Boston medal, which was in effect the first medal of honor awarded by a U.S. Congress.

The Washington Before Boston medal would be one of only about a dozen gold medals presented to military heroes of the Revolutionary War. Together with a few medals of related theme, these are known as the Comitia Americana (Latin for "American Congress") medals.

The siege of Boston offered the first good opportunity to cite specific actions for which to award the first medal to Washington, as members of Congress apparently had been eager to do. It would be the only gold medal Washington would receive for all his accomplishments in the Revolutionary War.

What Washington received immediately was word that the medal had been approved, and congratulations from those aware of the decision by Congress. It would be several years before the medal itself followed.

Legislation for the medal provided that a committee of three “be appointed to prepare a letter of thanks and a proper device for the medal.” John Adams, John Jay and Stephen Hopkins were selected.

For design, they turned to the foremost medalists in the world, in France.

In a 2007 work titled Comitia Americana and Related Medals: Underappreciated Monuments to Our Heritage, John W. Adams and Anne E. Bentley cite an invoice as showing P.E. du Simitiere first working on the design or modeling. For some reason, this medalist did not finish the work.

Pierre Simon Duvivier, another leading French medalist, took over the assignment and continued toward completing the final designs. Still, a considerable delay would follow in completing the designs for the gold medal that was to go to Washington, as well as for others that in time had been voted to other officers.

Adams and Bentley note that Treasury officials wrote to Benjamin Franklin, then minister to France, in 1779, and to David Humphreys, Washington’s aide-de-camp, in 1784, to pursue the issue of the gold medals.

Finally, prodded by Humphreys, the French academy of medalists completed the design for the Washington medal in 1785, but Duvivier did not complete the engraving until early 1789, according to Adams and Bentley. The Paris Mint struck the gold example that summer.

Duvivier’s obverse features a bust of Washington facing right. In the exergue are the words COMITIA AMERICAN. Surrounding the portrait is the legend GEORGIO WASHINGTON SUPREMO DVCI EXERCITUUM ADSERTORI LIBERTATIS (“George Washington commander in chief of the armies, assertor of liberty”).

Duvivier’s signature is just below the bust.

The reverse shows Washington and his staff on horseback, before cannon on the shore of Boston Harbor, with Washington pointing toward departing British ships.

Above is HOSTIBUS PRIMO FUGATIS (“the enemy put to flight for the first time”).

The gold example is in the care of the Boston Public Library, and a trove of silver examples are at the Massachusetts Historical Society.