This Day in History: April 18 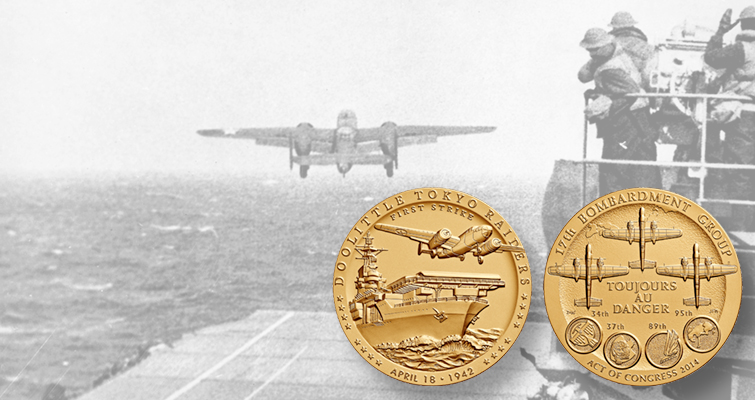 On April 18, 1942, the Doolittle Raid on Japan served as America’s response to the Pearl Harbor attacks, targeting Tokyo and other places on the island of Honshu during World War II.

The attack on Pearl Harbor, Hawaii, did not go unanswered.

On April 18, 1942, the Doolittle Raid on Japan served as America’s response, targeting Tokyo and other places on the island of Honshu during World War II.

The first air raid to strike the Japanese Home Islands demonstrated that Japan itself was vulnerable to American air attack. The raid served as retaliation for the Japanese attack on Pearl Harbor on Dec. 7, 1941, and provided an important boost to American morale.

Of the 80 Raiders that left the Hornet’s flight deck, eight were captured, two died in crashes, and 70 returned home.

On April 15, 2015, the two surviving Doolittle Raiders were presented with the congressional gold medal in Washington, D.C., and accepted the award on behalf of all the Doolittle pilots and crew. As a second lieutenant, Lt. Col. Richard E. Cole was the co-pilot for Crew No. 1. Staff Sgt. David J. Thatcher was the engineer-gunner for Crew No. 7.

Another Raider, Lt. Col. Edward Saylor, was alive to see passage of the medal’s authorizing legislation but passed away Jan. 28, 2015, at age 94. Saylor was the engineer for Crew 15.

For the medal’s obverse, a design by AIP Artist Chris T. Costello was sculptured by Mint Sculptor-Engraver Donald Everhart II.

The design depicts the USS Hornet launching one of the North American B-25B Mitchell bombers in choppy seas.

Inscribed around the raised border is DOOLITTLE TOKYO RAIDERS, separated by eight stars on each side, with the date APRIL 18 • 1942.

The 16 stars represent the 16 bombers.

On April 18, 2015, the anniversary of the raid, the gold medal was formally presented for permanent display at the National Museum of the U.S. Air Force, at Wright-Patterson Air Force Base, in Dayton, Ohio. 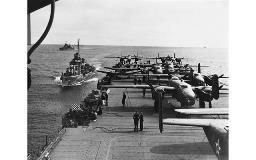 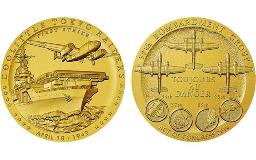 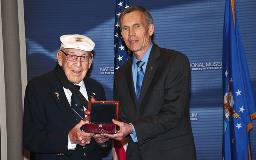