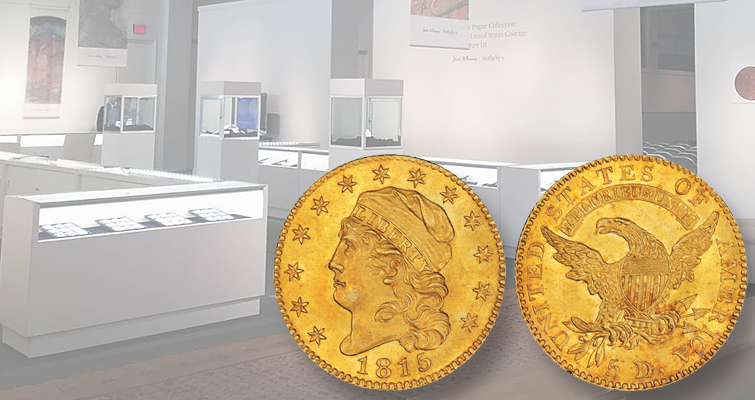 To many, the most significant coin in the third D. Brent Pogue Collection auction was the finest known 1815 Capped Head $5 gold half eagle, graded MS-65 by Professional Coin Grading Service. 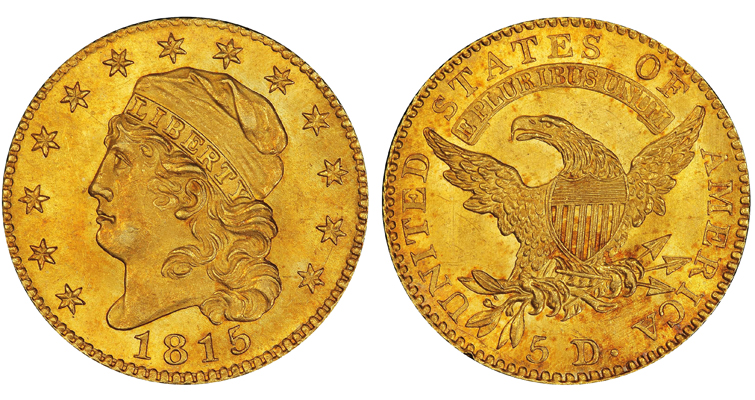 An 1815 Capped Head gold $5 half eagle graded MS-65, the finest known of fewer than a dozen, sold for $822,500 at Stack’s Bowers Galleries and Sotheby’s Feb. 9 auction of the D. Brent Pogue Collection. 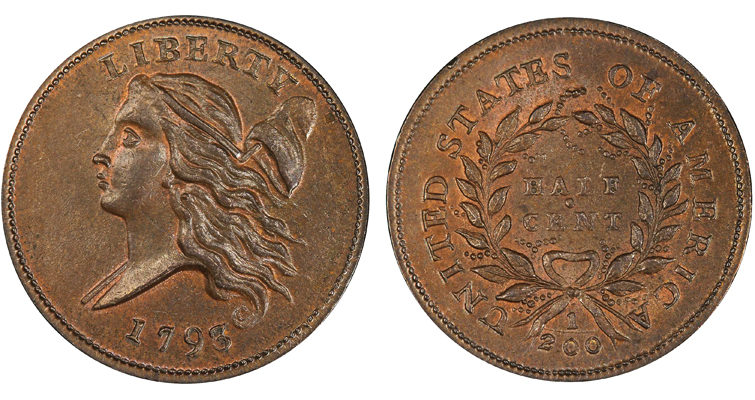 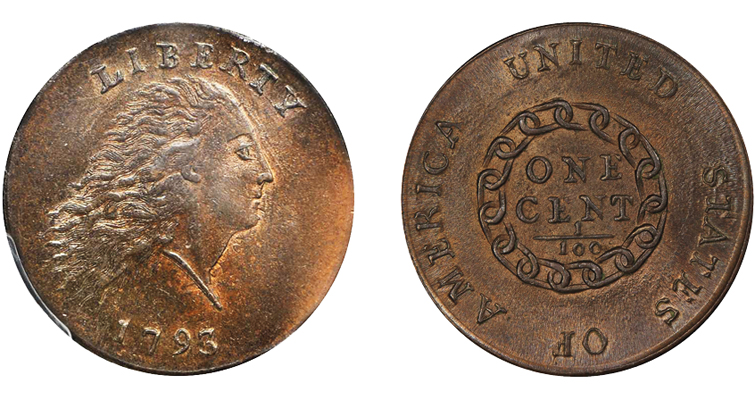 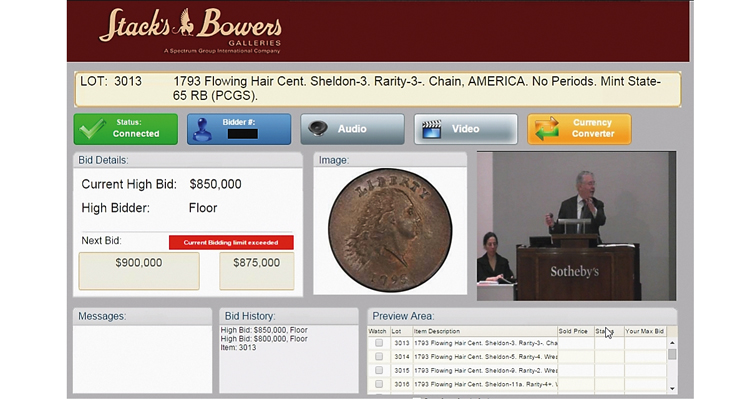 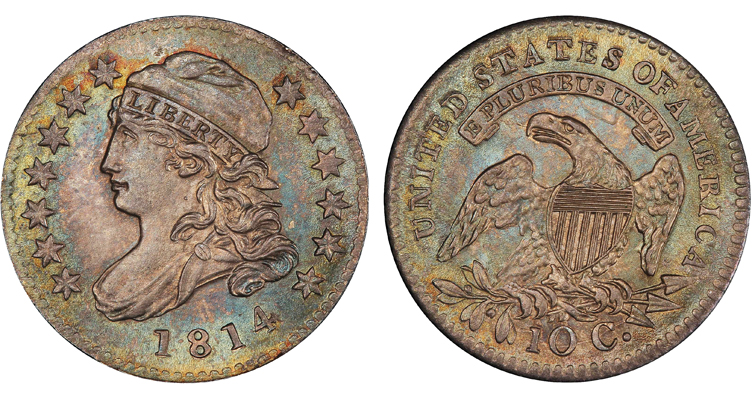 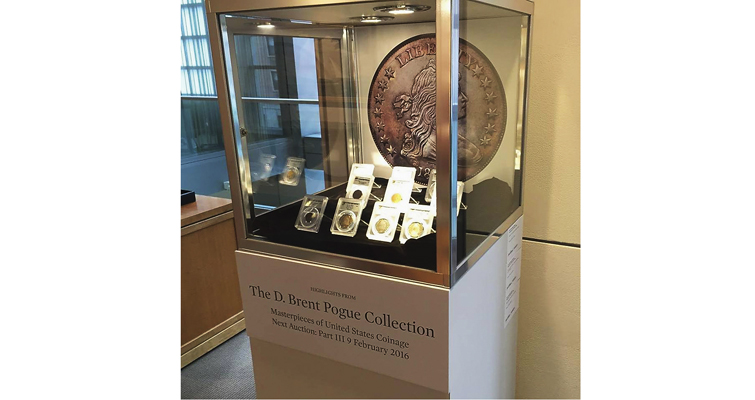 The collection was shown at Sotheby’s Manhattan headquarters before the auction to let bidders view the lots.

The third auction of the D. Brent Pogue Collection, titled “Masterpieces of United States Coinage Part III,” may have lacked the singular seven-figure rarities that were highlights of the first two auctions, but the sale, a joint venture with Stack’s Bowers Galleries, still brought $17,135,612.50.

To many, the most significant coin in the auction was the finest known 1815 Capped Head $5 gold half eagle, graded MS-65 by Professional Coin Grading Service. As the catalog entry began, “An American numismatic treasure, this gem 1815 half eagle would be the single star of the D. Brent Pogue Collection were it not for the presence of the only collectible 1822 half eagle.” It carried an estimate of $750,000 to $1 million and ultimately sold for $822,500.

It has long been considered a key landmark issue in U.S. coins. As Bill Eckberg noted in the February 2015 monthly issue of Coin World, “The entire mintage of 635 coins was struck, probably in less than an hour, on Nov. 3, 1815, for Thomas Parker, Charles Kalkman, and the Bank of Pennsylvania, who deposited the gold bullion.”

At the time, the Philadelphia Mint struck gold and silver coins only for depositors and in the denominations the depositors requested. As Eckberg explained, “if someone deposited $50 worth of silver, he could expect to receive exactly $50 in any silver denomination he chose. Gold deposits were paid out in gold coin.”

In 1815, in the aftermath of the War of 1812, just four denominations were coined: cents, quarter dollars, half dollars, and half eagles, though none of the 1815 cents carry the date 1815 and were likely dated 1814 using leftover dies.

At the start of the 20th century, just six or so 1815 half eagles were known, and over the next several decades a few more were discovered. Today, David Stone and Mark Van Winkle record 10 examples in their 2012 book The 1815 Half Eagle: New Discoveries, removing from the roster of examples a piece at the Connecticut State Library that was actually an altered 1813 half eagle.

Beyond the half eagle’s rarity, it is also beautiful, described by cataloger John Kraljevich as follows: “Coppery orange highlights are scattered across the richly original deep yellow surfaces, fairly subtle on the obverse but quite bold on the reverse, where this deeper color dominates the lower periphery. The luster is thorough and complete, blanketing both sides with a depth few specimens of any date of this type could match. The strike is complete and the surfaces are free of significant defects.”

Stack’s Bowers co-chairman Q. David Bowers wrote in a Feb. 3 blog on the firm’s website that the Pogue collection’s 1815 half eagle is “probably the most famous American gold coin.” He adds, “The 1822 half eagle, a coming attraction down the line [Pogue’s example of the 1822 half eagle will be in a future auction], is rarer, with only one in private hands — but is so rare that until the 20th century very little publicity was given to it. In the 19th century examples of the 1815 changed hands now and again when great collections were sold, bringing to the coin fame and admiration. In fact, the Royal Collection in Sweden has one and it is the key to its entire display in terms of value.”

Bowers continued, “A century and a half ago when hardly anyone knew that an 1822 half eagle existed, the 1815 was widely proclaimed as the rarity of rarities in the American gold series. Today, with 11 [sic] known across all grades, it is still famous. In Gem Mint State the D. Brent Pogue Collection specimen is unbelievable! It stands alone; no other coin is like it or even comes close! No amount of money can secure another once it crosses the auction block.”

The provenance for the Pogue example starts in 1925 when it was likely purchased by Virgil Brand from the Guttag brothers. It traded hands several times in the next 30 years until it was in the George O. Walton Collection (Walton, of the famed Walton 1913 Liberty Head 5-cent coin). It was included in Stack’s 1976 American Numismatic Association convention auction and then was part of the R.E. “Ted” Naftzger Jr. Collection. It was purchased by Pogue in 1982 and as Kraljevich concluded, “Decades have sometimes passed between opportunities to bid on any example of this classic American rarity; even the Henry P. Graves Supercomplication can’t tell the underbidder when this coin will next appear.”

The sale started strong with the first lot, a 1793 Liberty Cap half cent graded Mint State 65 brown by Professional Coin Grading Service that sold for $446,500. Among the finest examples known, it had an ownership history that went back more than a century. As the catalog noted, “Despite their rarity, the half cents of 1793 remain somewhat overshadowed by the cents of that year. They stand on equal footing as the only denominations struck in the U.S. Mint’s first full year of operation. Their histories are similarly robust, and the cents and half cents of 1793 both deserve plaudits as the first years of their denominations.” This was proven true as lot 13 crossed the block a few minutes later.

Pogue’s 1793 Flowing Hair, Chain cent, which Sotheby’s auctioneer David Redden described at the podium as the finest circulation strike example of this scarce one-year type, was graded MS-65 red and brown by PCGS and featured the AMERICA, No Periods reverse (the Sheldon 3 die variety). The catalog added, “The finest known example from these dies and a candidate for the finest Chain cent of any variety, the Garrett-Pogue Sheldon-3 has been cherished by collectors since it was discovered in France by Pierre-Édouard LeGras, a famous Parisian numismatist who died in 1881.” Though its voyage to Europe is “shrouded in mystery,” it returned to the United States and it passed through various hands until Pogue purchased it with the Foxfire Collection, which he purchased in its entirety on Oct. 5, 2004.

Sotheby’s promoted the early copper coins as charming examples from the earliest days at the Philadelphia Mint, writing about the Chain cent: “These humble coppers, made for Everyman, were wonderfully naïve, the designs not well planned (in one case not enough room was allotted to fully spell out AMERICA), and they were primitively executed. Liberty’s portrait was immediately criticized for appearing ‘to be in a fright,’ while the reverse motif, a linked chain, was deemed to be a ‘bad omen for liberty.’ Within two months the designs had been replaced by more elegant and less controversial imagery, making these earliest efforts a wonderful first chapter in our nation’s coinage.”

The exceptional quality of the dime was recorded in a catalog description that makes it hard to believe that the coin is more than 200 years old: “The surfaces are fresh, frosty, and vibrant, with cartwheel spinning energetically around both sides. The toning is similarly spectacular, with a rosy gray central obverse confined by concentric circles of pastel blue and pale yellow that appear to merge into sea green in raking light. A splash of amber surrounds the top of Liberty’s cap and adheres to the nearby stars. The reverse is more sedate but no less beautiful, melding pale blue and green with champagne around a deep gray central device. The fields are immaculate, pristine even beyond the abilities of the magnification-aided human eye.”

It was part of S. Hudson and Henry Chapman’s April 1904 sale of the John G. Mills Collection (Mills was 38 years old when the Chapman brothers sold his collection, rendering him “one of the younger collectors,” according to Chapmans’ preface). It was next offered at Stack’s sale of the Samuel W. Wolfson Collection in May 1963. Stack’s again offered it in March 2006 as part of the Northern Bay Collection. 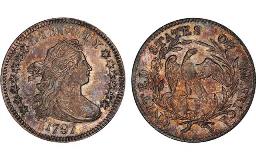 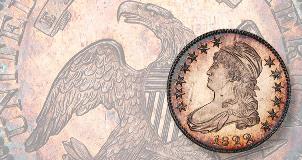 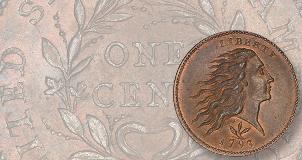