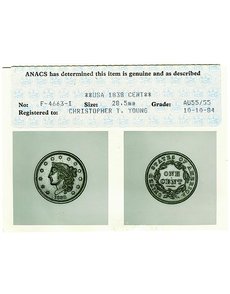 An ANACS photo certificate from 1984 illustrates an 1838 Coronet cent, with each side graded separately, evaluated as AU-55/55.

When I became a part-time dealer, as a junior high student and coin collector in 1952 and in 1953, no published grading standards (one seller’s “Brilliant Uncirculated” might be another’s cleaned Extremely Fine), no Professional Numismatists Guild or other resource to tag fraudsters existed, and altered and counterfeit coins abounded at coin shows.

As I have written before, I enjoyed this scenario immensely — as I had to learn everything in order to survive, never mind to prosper, in professional numismatics! This learning curve was steep, and it was a challenge to succeed.

Today, things are different. As I have written before, just about any salesman equipped with a box of certified coins and a price list can get on the telephone and be a “coin dealer.” Professional numismatist with skill, no.

Certified grading makes all the difference. Although the American Numismatic Association Certification Service graded coins beginning in the late 1970s and returned them with photo certificates, it was not until David Hall and his associates popularized “slabs” with the Professional Coin Grading Service in 1986, followed by John Albanese and his associates with the Numismatic Guaranty Corporation of America in 1987, that third-party grading caught on in a big way.

The intervening years have not been without problems and controversies, not to mention dozens of services that started up, but failed. As there are no regulations regarding starting a grading service, there are a lot of hokey ones around — some created just to sell coins by sticking a high-grade label on them.

If you want to see some services you’ve never heard of, just check the silver dollar listings on eBay. Trouble is that someone buying a “Mint State 65” dollar certified by the Super Ace Grading Service on the Internet, and who is not familiar with what is going on, will think that somehow eBay has vetted the seller.

PCGS and NGC are not the only highly esteemed grading services, but they remain by far the largest, followed by a small handful of others. Whereas years ago many rare and expensive United States coins were sold without submitting them to these services, today offering an uncertified coin is usually interpreted, rightly or wrongly, as a “warning” that there is a problem.

Outside of the federal series there are many collectors who consider themselves to be skilled at grading and don’t care if their tokens or medals are certified.

But, when time comes to sell, certification does add value!