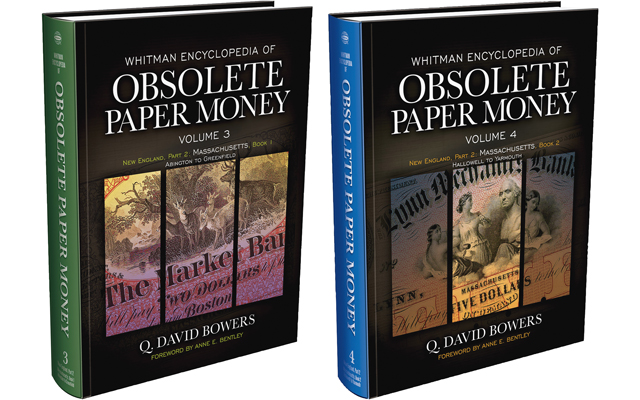 The covers of Volume 3 and Volume 4 of the Whitman Encyclopedia of Obsolete Paper Money hint at what's inside.

The next two volumes in the Whitman Encyclopedia of Obsolete Paper Money, by Q. David Bowers, will be available Dec. 1, 2014, according to the publisher.

The latest books, part of a multivolume series, offer 928 pages combined of information about obsolete notes issued in Massachusetts.

The books will be available at booksellers and hobby shops nationwide and online, for $69.95 each. The books can also be borrowed for free as a benefit of membership in the American Numismatic Association, through the Dwight N. Manley Numismatic Library.

The Whitman Encyclopedia of Obsolete Paper Money is a study of paper currency issued from 1782 to 1866, before the modern era of national bank notes and Federal Reserve notes. More than 3,000 state-chartered banks issued their own paper money, now obsolete.

Volume three offers the history of every Massachusetts town and city from Abington to Greenfield, as well as of every bank in those towns that issued obsolete notes. Volume four offers the same coverage for the towns, cities, and banks from Hallowell to Yarmouth.

“No price and rarity guide has been published on Massachusetts for many years,” Bowers says. “Collectors own thousands of notes that are awaiting proper identification; some of them have the potential to be worth thousands of dollars.”