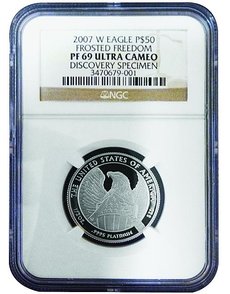 A California collector’s “Frosted Freedom” Proof 2007-W American Eagle platinum $50 coin has been authenticated by Numismatic Guaranty Corp. and given a grade of Proof 69 Ultra Cameo. It is the first $50 platinum coin, and the third overall piece, confirmed as bearing this variant surface detail.

The owner of the coin, a California collector who wishes to remain anonymous, discovered the anomalous coin in a four-piece set that he purchased directly from the U.S. Mint in 2007.

Several months after reading Coin World’s reporting of the variant, the collector retrieved his sets from storage and made the discovery. He then submitted the coin to be authenticated and graded by NGC.

Previous Proof 2007-W American Eagle platinum coins discovered bearing the Frosted Freedom reverse are a 1-ounce $100 piece and a quarter-ounce $25 coin. The recently discovered $50 coin is the first of its denomination found bearing this variety and has been labeled by NGC as a “Discovery Specimen.”

The discovery of the first Frosted Freedom variety coin was originally reported in the Feb. 7, 2011, issue of Coin World, when NGC announced it had certified a 1-ounce $100 piece as a new variety.

Graded by NGC as Proof 70 ultra cameo, the 2007-W 1-ounce coin was labeled as “FROSTED FREEDOM” and “DISCOVERY SPECIMEN” on its encapsulation label.

The reverse of all Proof 2007-W American Eagle platinum coins features an eagle with outstretched wings with a shield covering the eagle’s breast. Draped over this shield is a banner inscribed with the W Mint mark of the West Point Mint at left (as seen from the perspective of the viewer) and the word freedom at right.

On 2007-W platinum coins having a normal polishing pattern, the incused word freedom displays the same brilliant finish as the coin’s fields, thus standing out sharply within the frosted banner.

The variant coins, however, have the legend freedom frosted, so that it blends in with the rest of the design on the reverse.

Though not error coins, their sale to the public was an error on the part of the U.S. Mint.

The Mint confirmed that a small number of the coins were struck as “pre-production” pieces and inadvertently released for sale. Michael White of the Mint’s Office of Public Affairs stated that during the pre-production process, officials decided that the word freedom on the reverse would look better with a mirror finish than frosted as originally designed, and prepared new dies for regular production.

According to the Mint, up to 12 1-ounce coins, 21 half-ounce coins and 21 quarter-ounce coins with the frosted freedom inscription were mistakenly sold. The Mint reported it struck no tenth-ounce $10 platinum strikes bearing the frosted finish for the word freedom.

The owner of the $50 variant piece tells Coin World that he has no plans to sell the coin. ¦