There wasn't much new to collect out of circulation in 1922 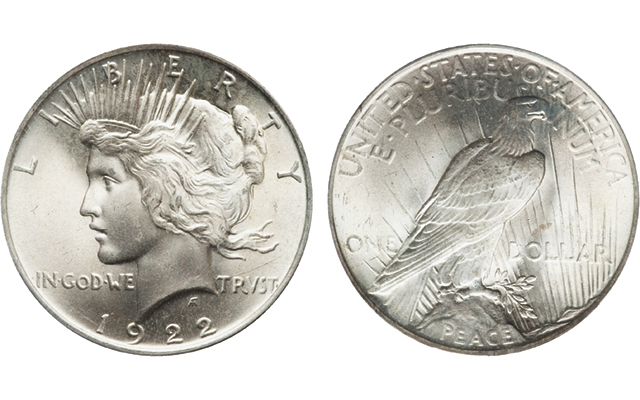 1922 was a devil of a year for collectors of circulating coins. There just wasn’t that much to collect. United Press reporter Kenneth W. Clark summed it up in a July 7, 1922, article.

“The 1922 coin crop is a complete failure. American pockets are so full of silver that there will be no nickels, dimes, quarters or half dollars coined this year, F. E. Scobey, director of the mint announces.”

Cents, dollars and double eagles were the only noncommemorative coins produced in 1922.

Clark reported, “As for pennies only a paltry $70,000 worth have been coined at the Denver mint, as against $492,000 worth the preceding year.

The 1922 cent run at the Denver Mint, though, did give collectors a delicacy — the 1922-D Lincoln, No D cent. Three pairs of dies accidentally struck cents with a faint or obliterated D Mint mark.

David W. Lange in The Complete Guide to Lincoln Cents, notes, “The significance and great value attached to the 1922 cent without mintmark D is based entirely on the curious coincidence of no cents being coined at the Philadelphia Mint during 1922. There’s no telling how many other times that cents were issued from the branch mints without a visible mintmark.”

Taking up the slack in Mint production was the silver dollar — as many as 1 million a day. Under the Pittman Act, the Mint had to buy hundreds of millions of ounces of silver from mine owners and convert it to coins. In 1922, nearly 85 million Peace dollars were struck at the Philadelphia, Denver and San Francisco Mints.

In his annual report, Scobey said, “Working periods of 16 hours and 24 hours per day were again a feature of the year’s operations, incident to the effort to reduce quickly the ‘dead’ stock of Pittman Act silver bullion to an active asset in the form of silver dollars, against which silver certificates could be issued.”

The dollars went nowhere for decades. Scobey noted, “At the Denver Mint the inspection pit under the main storage vault was converted into a subvault, capable of holding 30,000,000 standard silver dollars, thus meeting the urgent need for additional vault space.” The silver dollars stayed put until the early 1960s, when rising silver prices raised interest in the dormant coins.