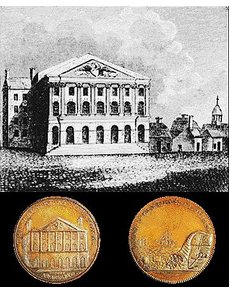 The Theatre at New York token has long been popular in American circles. This is due in no small part to its listing in A Guide Book of United States Coins. It has always been one of my favorites, and one of these days I’ll have to buy one. This is easier said than done as fewer than 20 are known.

The cornerstone of the theater was laid on May 5, 1795, on Chatham Row, New York City. At first called the New Theatre, the facility officially opened on Monday, Jan. 29, 1798. Featured was William Shakespeare’s As You Like It, preceded by an address by Mr. Hodgkinson and a prelude by Mr. Milne, and followed by Purse, or American Tar, a musical entertainment. Up to about 2,300 people could be seated.

The copper tokens measuring 34 millimeters were issued in England about 1798 as cabinet pieces for collectors. Benjamin Jacob cut the dies, and they were struck in the factory of Peter Skidmore in London. The obverse view of the theater was copied from Longworth’s American Almanack, New-York Register and City Directory, 1797, in a sketch by Elkanah Tisdale.

In March 1872, The American Historical Record published a detailed article, “The First Theatre in America,” illustrated with the sketch shown here. This attracted the attention of a reader, J.N.I., of Bridgeport, Conn., who sent a letter published in that journal’s June issue, which stated in part about the sketch:

“That it was the original design for the theatre I have no doubt, but a vast amount of evidence forces me to the conclusion that the actual building was never finished in accordance with it. ... I have been familiar with many persons, now deceased, who were contemporary with its erection, and I never knew one to say that its front was other than rough and entirely unembellished. A gentleman told me that he could remember the Park Theatre from the year 1800, and that it always presented a most unsightly appearance, and that a row of beams protruded from the front walls above the doorways, and beneath the first range of windows, to which it was intended to connect a portico or colonnade over the sidewalk, but being prohibited by the city authorities, the beams remained bare projections for many years. ... Numerous other parties resident in New York at the time of its destruction all assert that the building was then entirely destitute of architectural ornament.”