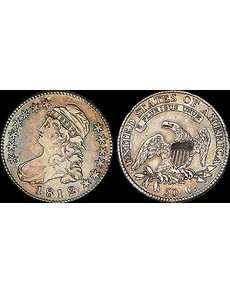 The 1812/1 Capped Bust, Large 8 half dollar is the only Rarity 5 die marriage (31 to 80 pieces known) for the 1812 overdate half dollars, with no other die marriages for the year commanding a premium.

Two hundred years ago, the fledgling United States was about to embark on its first war since Independence. A range of British actions led President James Madison to sign a Declaration of War in June, beginning the War of 1812.

Amid the confusion, work at the Philadelphia Mint continued. The last shipment of Matthew Boulton’s copper planchets from England was received on May 9, just a month prior to the declaration of hostilities. The planchets, weighing 44,800 pounds, lasted into 1814. The Mint struck 1,075,500 Classic Head cents in 1812 from four die marriages, consisting of two each Large and Small Date varieties. No rare marriages are identified, but quality cents are difficult to find in any grade. Expect to pay significant premiums for superior planchet quality.

The only silver coin struck was the half dollar. The Capped Bust half dollar was represented by 10 die marriages and a total mintage of 1,628,059 pieces. Collectors will need to obtain two overdated (1812/1) die marriages: one with a Small 8 in the date and the rare Large 8 variety. The 1812/1 Capped Bust, Large 8 half dollar is the only Rarity 5 die marriage (31 to 80 pieces known) for the year. No other, nonoverdated, die marriages will command a premium.

Many interesting die states are available for this year, as dies were used as long as possible. One such die state is the relatively newly discovered Single Leaf, Overton 110 (Early Half Dollar Varieties: 1794-1836 by Al C. Overton and Donald Parsley). This rare die state was created by excessive lapping of the reverse die, which removed enough metal to eliminate one of the uppermost leaves in the design.

The only gold issue for the year was the Capped Draped Bust $5 half eagle. Only 58,087 pieces were reported struck. Two die marriages were made from one obverse and two reverse dies. The difference between the two reverse dies is the width of the denomination.

The Wide 5 D variety is the most commonly found gold $5 half eagle designed by John Reich. The Narrow 5 D half eagle is much scarcer, appearing in auction records about one third as many times as the wide denomination. Even though it is much rarer than the Wide 5 D variety, it does not command a huge premium.

Remember that all half eagles of this period are rare, as many were melted when the standard weights changed in 1834 and at other times when the bullion value exceeded the face value.

Collectors deciding to obtain a complete die marriage set of 1812 coins can do so without having any major rarities stand in their way.