The works of Robert I. Aitken 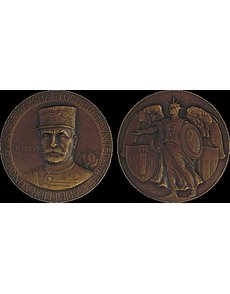 Robert I. Aitken, best known as the designer of the 1915 Panama-Pacific International Exposition round and octagonal gold $50 coins, also designed a medal depicting Marshal Foch for the American Numismatic Society.

It is hard for Americans today to understand the euphoria that greeted visiting foreign dignitaries to the United States in the years following World War I.

Heroic welcomes and ticker-tape parades greeted visiting Allied leaders of the recent conflict, and the New York-based American Numismatic Society expanded its medal program to commemorate some of these stirring events.

Former Allied generalissimo on the Western Front, Foch entered the French Army during the 1870 to 1871 Franco-Prussian War.

Despite a Jesuit education and the Third Republic’s fear of practicing Catholic officers, his advancement continued. With the outbreak of war in August 1914, Foch planned and carried out epic defensive actions against the invading Germans.

His message to Gen. Joseph Jacques Césaire Joffre during the battle of the Marne helped create his public mystique: “My center is giving way, my right is falling back, situation excellent, I attack!”

Promoted to marshal, Foch dictated armistice terms to the Germans in the Forest of Compiegne in November 1918 and headed the Allied military committee at Versailles, striving unsuccessfully to obtain the left bank of the Rhine for France. He characterized the resulting treaty as no peace at all, but only a 20-year armistice.

The ANS medal was designed by Robert Ingersoll Aitken (born 1879, died 1949), a San Francisco native best remembered by numismatists as designer of the 1915 Panama-Pacific International Exposition round and octagonal gold $50 coins.

Among Aitken’s most famous monumental sculptures is the west pediment of the U.S. Supreme Court building in Washington, D.C., where Aitken himself appears in the pediment left of Liberty and Chief Justice Charles Evans Hughes.

Aitken’s ANS medal of Foch presents a nearly full-face uniformed bust in the uniform of a marshal of France with the ANS oak leaves at right.

A radiate winged Victory dominates the reverse with French and American shields, holding a round shield with the American Legion logo. Medallic Art Co. struck one gold, 94 silver and 205 bronze examples.

Aitken once described the linking of all elements of an art medal. “In making a medal or medallion the main problem is to add, if possible, to its metallic alloy the one ingredient which makes bronze imperishable — Beauty —Beauty in thought and execution. For Beauty inspires Love — Love creates Beauty.”

David T. Alexander, is a longtime numismatic researcher and author of American Art Medals, 1909-1995. He can be reached at Alexander.Numismatics@gmail.com