The secret to selecting the best Standing Liberty quarter dollars 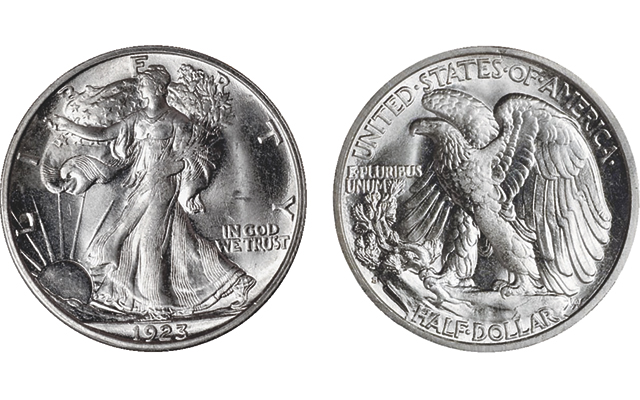 This gem 1923-S half dollar was certified as MS-65. All ever seen by the author are lightly struck in areas, especially the center of the obverse. If you can find one with “Full Details,” likely it would cost no more!

I find it very interesting to watch the marketplace, but I have never been able to figure out the pricing structure on Standing Liberty quarter dollars minted from 1916 to 1930.

Some years ago an innovative person, identity either forgotten or not known to me in the first place, came up with the term “full head” to describe coins said to be of exceptional value — sometimes multiples of the price of an ordinary strike. As to Full Head sharpness, the Philadelphia Mint 1917 Standing Liberty, Bare Breast quarter dollar nearly always comes this way. In contrast, the 1926-D quarter’s head is usually softly struck.

Illogically, many if not most quarter dollars certified as having full head status have weak rivets in the shield. In other words, another area of the coin is weakly struck. To my knowledge, no one has ever assembled even 50 percent of the coins in the series with full, sharp details on both the head and rivets.

Winged Liberty Head (“Mercury”) dimes are said to be much more valuable if they have full bands on the fasces on the reverse. The 1921 dime, for example, is often seen with full bands, but with the last two digits in the date weak.

Now to the secret: Except for a few 20th century series, most coins do not yet have “tags.”

Indian Head 5-cent coins (Buffalo nickels) thus far have not had a popular tag assigned to them.

Many Seated Liberty coins have weak star centers, many Barber half dollars are weak at the upper and lower left of the reverse. I have never seen a sharp 1923-S Walking Liberty half dollar, but if one exists it would likely not sell for a premium!

As I see it, there are lots of opportunities to study fields that do not have tags for sharpness, and with patience buy Full Details rarities while no one else is looking! If tags are invented in the future, the value of certain of your coins will multiply!