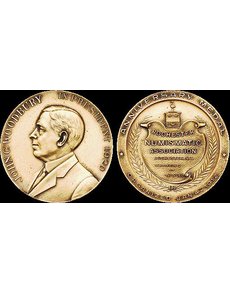 Only 14 examples of the Rochester Numismatic Association’s past president’s medal for John C. Woodbury are known extant among collectors. Most of the pieces struck were supposedly donated to a museum.

Rarity fascinates collectors everywhere. The designation “rare” elevates the ordinary and warms the heart of the possessor, bringing with it dreams of profit.

Collectors quickly learn, however, that rarity and value are cousins, not sisters. Take, for example, the president’s medals of the Rochester (N.Y.) Numismatic Association, which celebrated its centennial in 2012.

A century ago, the American Numismatic Association was well into a growth spurt and was seeking ways to achieve further and faster expansion. Annexing already-existing local groups and encouraging formation of others was one way to do it, and holding ANA conventions in smaller cities was another.

Rochester, N.Y., was a go-getting industrial city with many hometown boosters, including a successful gynecologist and large cent collector, George P. French, whose fame still resounds among aficionados of early copper. French is sometimes remembered for the hostile nickname “the jolly abortionist” applied to him by a later guru with his own character issues, William H. Sheldon.

The new RNA lost no time in striking a 2-inch medal honoring its founder, designed by medalist Joseph A. Koeb. This launched an enduring tradition of issuing a portrait medal for each succeeding president. Since RNA presidents serve a one-year term, the full roster of medals existing a century later is surprisingly large.

All RNA medals were struck in limited numbers, but a major rarity emerged unexpectedly among the early issues: the 1920 medal of the ninth president, local businessman John C. Woodbury. Apparently the number struck was similar to the other early issues.

However, the Woodbury medal is essentially noncollectible today. RNA Past President Gerard Muhl’s research found that a daughter, Margaret Woodbury Strong, held onto the vast majority of the issue and seemingly donated the medals to some museum, but not Rochester’s own Strong Museum.

Today, only 14 examples of the Woodbury medal are known to be extant among collectors. Shown here is the American Numismatic Society’s medal (ANS 1925.69.3, gift of RNA).

RNA medals from 1920 through 1978 were designed by German-born engraver Alphonse A. Kolb, longtime employee of Rochester-based Bastian Brothers. A 61-year member, Kolb received nationwide publicity for his decades of medal designs, which only ended with his death in 1983 at the age of 91.

Although there are plenty of other RNA medals to go around, the Woodbury medal is sure to remain the lodestar and challenge for completeness-minded collectors.

David T. Alexander, is a Senior Numismatist and researcher for Heritage Auctions, at davida@ha.com. He is author of American Art Medals, 1909-1995.