The price of quality goes up 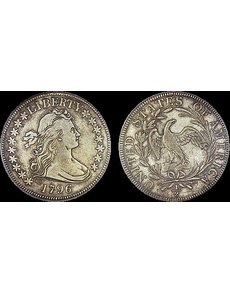 The rare half dollar has nearly every quality that the market currently covets. The catalog description noted its clean, original-looking surfaces and “soft reddish-gray patina with delicate grayish-brown accents.”

Further, it has no problems of note, was housed in an early Professional Coin Grading Service slab, and showed good design definition for the grade. It also has a provenance — or ownership history — that traces back to Abe Kosoff’s sale of the Lee G. Lahrman Collection in February 1963, and a later Bowers and Ruddy sale in 1980. Collectors like their six-figure coins to have a history.

The description added, “Simply put, 18th century coins that have experienced moderate circulation do not ordinarily come this nice!” The only quality perhaps missing to make it an ideal coin for today’s market was a green Certified Acceptance Corp. sticker that denoted exceptional quality, although the $105,750 price seems to render such an outside opinion unnecessary.

The coin is part of what is likely the most coveted silver type issue — the 1796 and 1797 Draped Bust, Small Eagle half dollar — which features just four separate die marriages across two years. The total mintage for the entire type was a scant 3,918 coins, of which only a tiny percentage, sometimes estimated at around 5 percent, exist today.

Even low-grade examples are beyond the means of most collectors, as evidenced by a 1796 example graded Fair 2 that realized $27,600 at an April 28, 2011, Heritage auction. The most unattractive examples rarely sell below $20,000.

Did the VF-25 coin sell for a bargain price during its 2010 auction appearance or has the market for classic early type coins advanced substantially since then? It is dangerous to read too much from a single auction transaction.

These handsome rare coins have traditionally been solid stores of value. For collectors of these early, problem-free circulated issues, each time one is offered the question arises: When will another become available? ¦