The premium of a 'brand name' collection 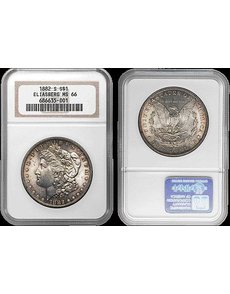 A Mint State 66 1882-S Morgan dollar is a fairly common coin, but when from a great collection it enjoys a modest bump in value. This example which was once part of the Eliasberg Collection realized $373.75 when offered in 2010.

A collector doesn’t have to have a gigantic budget to own a coin that was once part of a great collection or owned by someone famous.

Great collections by “brand names” in numismatics, so famous that only last names are needed, like Eliasberg, Garrett or Pittman, have plenty of rarities. But their extensive collecting scope means their collections included many “normal” coins alongside the rarities.

Louis E. Eliasberg Sr. sometimes strove for completeness over quality and didn’t always strive to get the best of everything. For example, a pleasant but undistinguished 1883 Liberty Head, No CENTS 5-cent piece, graded Mint State 64 with the Eliasberg provenance noted clearly on the slab, realized $161 at a 2010 auction. Because of the pedigree, the price was roughly double what comparable examples sell for at auction.

Sometimes, coins that were part of great collections are very nice, but also extremely common, as is the case with Eliasberg’s MS-66 1882-S Morgan dollar that brought $373.75 at a 2010 auction. That same amount could have purchased his 1850-O Coronet gold quarter eagle with About Uncirculated details, but also carrying scratches and improper cleaning, at a 2011 auction.

Finding a low-value coin from the collection of John Jay Pittman may be a bit easier. Pittman was a collector of not unlimited means, and among his rarities he had some very usual coins. His 1943 Winged Liberty Head (Mercury) dime graded Mint State 67 brought $50 and his 1857 Indian Head gold dollar in About Uncirculated 55 realized $253 at 2010 auctions. Both prices are right in line with prices realized for coins without a noteworthy former owner.

Of course, a coin’s numismatic value can mean little if the coin was once owned by a mainstream celebrity.

During a Beverly Hills, Calif., auction of the estate of Greta Garbo, a circulated 1905 Indian Head cent that to a numismatist would sell for around $5, carried an estimate of $50 to $100 and realized an astounding $448. Garbo was born in 1905, so the coin presumably had a personal connection to her.

Two Morgan dollars dated 1898 and 1903, respectively representing the years that her brother Sven and sister Alva were born, sold for $500 when individually they would typically sell at around the $40 level.

Perhaps the best-known “celebrity premium” paid for coins happened during the April 26, 1996, Sotheby’s auction of the estate of Jacqueline Kennedy Onassis. A lot of nine 1967 and two 1964 Kennedy half dollars grading About Uncirculated to Brilliant Uncirculated realized an astronomical $8,645, exceeding the estimate of $200 to $300.

A similar group of 11 half dollars could easily be purchased for around $10 at the time. ¦