The Joys of Collecting: Issue struck with reverse of 1860 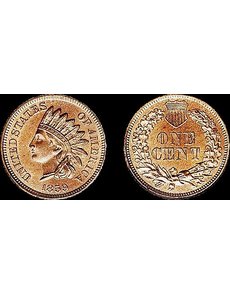 The 1859 Indian Head cent with the Reverse of 1860 with oak wreath and shield, is a “sleeper” in the author’s opinion.

You probably know about the regular 1859 Indian Head cent — an issue for which 36.4 million coins were struck.

The Flying Eagle cent, introduced in 1857, had problems with striking. The heavy wreath on the reverse was opposite the eagle’s head and tail on the obverse. In a coining press, the positions of the dies caused those obverse features to be weak unless careful adjustments were made.

The Indian motif solved this — the wreath on the reverse, of a different design and in lower relief, was opposite shallow lettering on the obverse die. The high relief part — the Indian Head depiction of Miss Liberty — was in the center, and it struck up properly.

The 1859 cent had a wreath composed of olive or laurel leaves (the Mint used both terms). For reasons not known, at least to me, toward the end of the year a change in the design was made.

The wreath was replaced with a wider one, with oak and other leaves and with a shield at the apex. In 1860, this became the regular design, and 20,566,000 were struck for circulation.

The origin of the new modified design is related by a letter from Mint Director James Ross Snowden to the Treasury Department, Dec. 13, 1859, stating that a change of the reverse design would be desirable, and enclosing specimens to illustrate the new concept. Secretary of the Treasury Howell Cobb approved the new design the next day.

Soon afterward, perhaps a thousand or so circulation strikes (not Proof patterns) were made by combining an 1859 obverse with the reverse of 1860 to augment the few samples made earlier. I estimate that perhaps as many as several hundred are known, nearly always seen in Mint State. These have been traditionally called patterns and have not been publicized. I suggest that they are not patterns at all. If they had been intended as such, it seems that they would have been made in Proof format and would have been produced in small numbers.

As 1859 Indian Head, Reverse of 1860 cents are at least four to five times more rare than 1856 Flying Eagle cents, if they were publicized and listed in A Guide Book of United States Coins, they would be valued in the tens of thousands of dollars. Instead, these “secret” coins in choice Mint State usually sell in the very low four figures.

In the 1957 edition of Wayte Raymond’s Standard Catalogue of United States Coins, these are indeed listed as regular issues — no collection of Indian Head cents can be complete without one! What do you think?