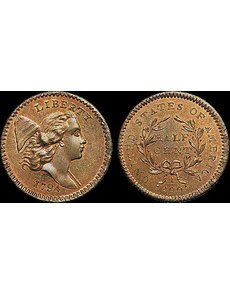 The 1794 half cent, Cohen 7 (American Half Cents: The “Little Half Sisters” by Roger S. Cohen Jr.), is now certified Mint State 67 red and brown by Professional Coin Grading Service and stickered by Certified Acceptance Corp. It is one of the 228 PCGS-certified United States half cents dated 1793 through 1857 that comprise what is referred to as the Missouri Cabinet.

The half cent collection will be offered by Ira & Larry Goldberg Coins & Collectibles, in conjunction with McCawley and Grellman, The Copper Specialists, at the Luxe Sunset Boulevard Hotel, 11461 Sunset Blvd., in Los Angeles. Collectors can view the catalog online at the Goldbergs’ website, www.goldbergcoins.com/.

The Missouri Cabinet was assembled during a 40-year period by R. Tettenhorst, the pseudonym of a St. Louis collector who selected each coin. It is the result of collaboration between Tettenhorst and the Eric P. Newman Numismatic Education Society (EPNNES)

PCGS ranks the Missouri Cabinet No. 1 in all eight Set Registry categories applicable to half cents. The collection includes numerous half cents pedigreed to famous numismatists like Philip M. Showers and Col. E. H. R. Green, among others.

Legendary Fort Worth, Texas, dealer B. Max Mehl sold the half cent collection of Howard Rounds Newcomb — author of United States Copper Cents 1816-1857 — in its entirely in 1935 to Green.Green died in June 1936 and the Green collection was purchased from his estate in 1943 by St. Louis numismatists Burdette G. Johnson and Newman.

Of the 96 Newcomb-Green half cents, 42 are in the Missouri Cabinet. The name “Missouri Cabinet” was coined by numismatic researcher and author Walter Breen when he visited St. Louis to photograph the coins for his 1983 reference, Walter Breen’s Encyclopedia of United States Half Cents 1793-1857.

Numismatist Fred Weinberg was in his early 20s when he stumbled upon the 1794 half cent during one of his many buying trips across Europe for Numismatics Ltd. in Beverly Hills, Calif.

On one venture to Zürich, Weinberg, traveling with Numismatics Ltd. owner Harry Gordon, eventually visited a small coin show in a remote village several hours away.

Their primary purpose for the trip was the same as previous European ventures — acquisition and repatriation of thousands of United States gold coins, primarily $20 double eagles, that had been sent overseas to help settle U.S. debts with foreign nations. Weinberg said he repeated a single phrase in Swiss German at each table indicating that he was seeking U.S. gold coins.

Seated at one table was an older couple who had some European copper and silver coins in open display trays. Although they did not have any U.S. gold coins to offer, the man’s hesitation at Weinberg’s repetition of the Swiss German phrase about seeking U.S. gold coins did produce an unexpected offer — a silver 1916 Standing Liberty quarter dollar and a 1794 Liberty Cap half cent.

The quality and strike of the 1794 half cent quickly caught Weinberg’s eye. Weinberg said he was quoted, in Swiss francs, the equivalent of $1,200 in U.S. dollars to buy the two coins, and he made the purchase.

Weinberg said he showed the coins to Harry Gordon and Swiss dealer Heiner Stuker, who learned from the couple that the half cent had been passed down through the man’s family.

Concerned it could be delayed through customs if placed within the Numismatics Ltd. Brink’s shipment of gold coins back to the U.S., Weinberg said he carried the 1794 half cent securely in his briefcase for the plane ride home.

Only when he began to research the 1794 half cent while back on American soil did he learn it was the so-called “High Relief Head” variety.

Cohen writes in his 1971 reference that the obverse of the Cohen 7 variety is noted for high relief on Liberty’s hair.

Grellman says in his auction lot description for the coin:

“The hair wave to the left of the ear is especially high on this die, which was used to strike the C-7, 8 and 9 die varieties ... . And because the designs are raised well above the rims they wore down rapidly. But on this sharply struck piece the highest wave left of the ear retains its intended character, coming to a prominent peak well above the rest of the hair as the engraver intended.

Weinberg said his initial estimate for the 1794 half cent was about $5,000, which quickly escalated when he determined its rarity. The coin was advertised a number of times in Coin World in 1977 and 1978 with an asking price of $35,000.

Special Edition hardcover catalogs for the January sale are available by preorder only. The cost per catalog is $125 and all orders must be placed by Dec. 1, 2013.

The collection will be on display at the Goldberg booths (407, 409, 506) at the American Numismatic Association World’s Fair of Money Aug. 13 to 17 in Rosemont, Ill.