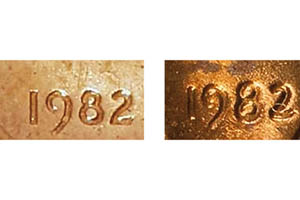 During 1982 the U.S. Mint transitioned from the 95 percent copper, 5 percent zinc alloy to the copper-plated 97.5 percent zinc planchet for Lincoln cents. Due to a master die change, Small Date, top, and Large Date, bottom, variants were produced in both compositions. Shown are the two date varieties in copper-plated zinc.

Collectors looked forward to 1982 with great anticipation. They knew new coins were on the way. One would be available in circulation and another would restart the U.S. commemorative series.

First off the press was a new composition for the Lincoln cent. Although the Lincoln cent would retain Victor David Brenner’s portrait of Lincoln on the obverse and retired Mint Chief Sculptor-Engraver Frank Gasparro’s Lincoln Memorial on the reverse, 1982 versions of the lowest denomination coin offered the promise of collecting opportunities.

When the Reagan administration took office in 1981, it faced rising copper prices and the reality of a cent coin costing more than its face value to produce. Mint officials had a wealth of research. They had seen the same dilemma in the early 1970s and had proposed changing the composition of the cent to aluminum.

A lightweight, different-colored coin had met opposition in Congress. As the debate reached its zenith in 1974, the price of copper receded, and the Mint continued striking the 95 percent copper, 5 percent zinc alloy cents.

Seven years later, in April of 1981, Treasurer Angela “Bay” Buchanan went before Congress, noting that Treasury already had the authority to change the cent’s composition, and she declared it would.

By changing to a copper-plated, zinc alloy (97.6 percent zinc and 2.4 percent copper) Mint officials stated they would save an estimated $50 million per year, just in production costs.

The copper-plated zinc alloy had two important attributes: It was more cost effective and visually it would not signal a change to the public. Although technically 19 percent lighter than the 95 percent copper alloyed coin, unless one was holding literally a handful of each at the same time, it was difficult to distinguish between the two coined alloys.

The Mint ramped up its production facilities in the fall of 1981. Both the West Point Bullion Depository and the San Francisco Assay Office produced cents made of the new alloy. Since neither was officially a Mint, no Mint mark was placed on any of the copper-plated zinc cents dated 1982 struck at the two facilities. Since the Philadelphia Mint at the time did not place a Mint mark on the cents it produced, it was impossible to tell at which of three facilities the new composition coins had been struck.

The Denver Mint placed the D Mint mark on both alloy compositions it struck in 1982.

The 1982 Proof set included a 95 percent copper cent bearing the S Mint mark, since Proof sets were made at the San Francisco facility.

Collectors were rewarded with seven variants in 1982.

The Mint changed its master die in 1982 and the difference in size of the date created Large Date and Small Date variants in each composition of circulating cents.

BETH DEISHER was editor of Coin World for 27 of the 331 yearse she was on the publication's staff. She may be contacted at Beth@CashInYourCoins-Book.com.