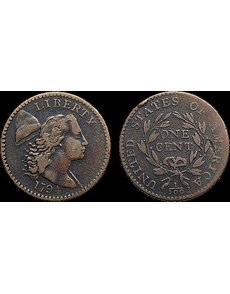 A worn copper cent such as this rare NC-10 die variety of 1794 Liberty Cap cent once part of the Dan Holmes Collection, or even one that isn’t rare, has a special attraction for many numismatists, including Q. David Bowers.

One of my favorite coin magazines is Penny-Wise, the official publication of Early American Coppers Inc. (www.eacs.org).

EAC draws together about 1,300 collectors who enjoy the lore and lure of half cents and large cents of the 1793 to 1857 era with a nod to Colonial coppers of the 1780s as well. EAC has maintained its membership more or less steadily in recent years, according to a report by treasurer Chuck Heck, this in a time when many other specialty groups in various hobbies are registering declines.

The club operates at a profit — a combination of dues and advertising revenue plus generous donations from some members. Still, it is worrisome that the meeting at American Numismatic Association World’s Fair of Money in August had only one out of 30 attendees who was less than 50 years old.

The graying of collectors is a widespread concern across many hobbies. The younger set seems to find computers more interesting.

Penny-Wise’s editor is Dr. Harry Salyards, one of the most fluent, knowledgeable and interesting-to-read writers in numismatics. Each time a copy of Penny-Wise arrives I immediately open it to his editorial on page 1 — always insightful and interesting.

In the most recent issue Harry told how he got started:

“In my case it was a small box of Indian cents that had been set aside for my mother when she was a child (she was born in 1917). There was a scattering of other coins in that box — a nearly-slick 1844 quarter comes to mind — but the real fascination was with the cents.

“Why? Because my own childhood experiences had taught me that a cent was something of value that even a kid could hold — and spend. And here were cents that were minted in the years that my grandmothers were born! It all seemed magical, somehow. Long before the realization that ‘you can’t go home again,’ here was home, somehow. The next step was checking the dates on any cent I could find. ...”

Copper has a special charm that copper-nickel, silver and gold coins cannot equal.

Stated a different way, a collection of state copper coins of the 1785–1788 era, or a display of cents and half cents from the 1790s and early 1800s in mixed grades of Very Good to Fine or Very Fine, will be widely admired. In my view, a collection of silver or gold coins in similar preservation would attract hardly any notice.